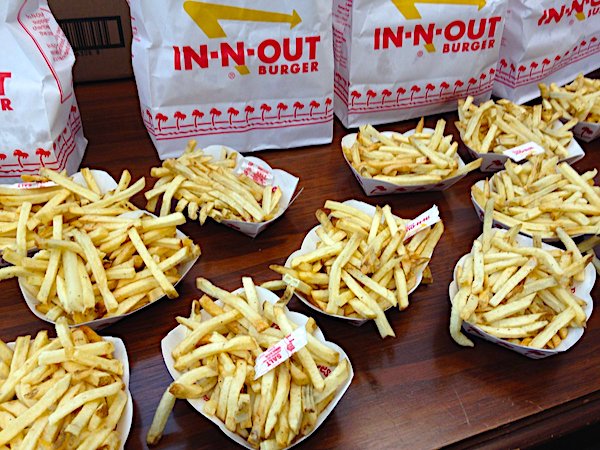 An employee of an In-N-Out Burger restaurant in Southern California is receiving praise on Twitter for confronting members of the radical Extinction Rebellion climate-change group.

That's the organization whose co-founder Stuard Basden recently confessed his objective is to destroy the "delusion" of "heteronormativity," the idea that heterosexuality is normal.

According to RedState.com, employees at the restaurant on the Pacific Coast Highway in Long Beach "ushered the protesters out."

One protester was "very politely" picked up and carried outside, the report said.

Climate change activists raid a burger joint and harass the workers. Neither the employees nor police are having it. People are fed up with Extinction Rebellion. pic.twitter.com/6bIPK4pb9U

The Twitter user who posted the video wrote: "Climate change activists raid a burger joint and harass the workers. Neither the employees nor police are having it. People are fed up with Extinction Rebellion."

Twitter user That OU Flag Guy wrote: "Give him a raise/promotion. He protected the 2 dozen paying customers from being subjected to their nonsense by removing them from dining room."

The future is bright, Peachy Keenan: "WOW! Is this Cali? The people inside cheered loudly when the big boy tossed hippie man out! There is hope yet!"

Michael T. Vail expressed the reaction of many: All of the sudden I have a craving for In-N-Out burger."

RedState reported Extinction Rebellion protesters in San Francisco linked hands and blocked traffic on both sides of the intersection at Gates Avenue near the University of San Francisco.

"A gentleman in scrubs did not take kindly to them preventing him from getting to work. He let them know by ripping their banner out of their hands and tossing it over a fence."

The report said, "As you may know, the owner and heiress of the burger chain, Lynsi Snyder, isn’t shy about saying that her business is influenced by her Christian beliefs, even putting Bible verses like John 3:16 on the bottom of the cups.

"But they're also known for their tasty burgers and great service, with a big focus on customer satisfaction."

In-N-Out's revenue is expected to surpass $1 billion this year.

The report said it wasn't clear why protesters targeted that store, "although climate change folks have made meat one of their targets."

"But the employees with that great customer service ethic were having none of that."

When police showed up, they arrested at least one of the protesters.

"And people loved it," the report said.

He explains the group priorities.

"The delusion of white-supremacy centers whiteness and the experience of white people, constructing and perpetuating the myth that white people and their lives are somehow inherently better and more valuable than people of color," he wrote.

"The delusions of Eurocentrism include the notion that Europeans know what is best for the world," said Basden.

"The delusions of hetero-sexism/heteronormativity propagate the idea that heterosexuality is ‘normal’ and that other expressions of sexuality are deviant. The delusions of class hierarchy uphold the theory that the rich elite are better/smarter/nobler than the rest of us, and make therefore better decisions."