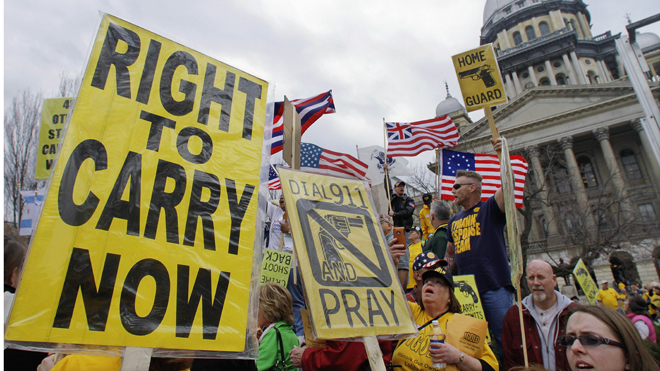 An Illinois law that would disqualify nearly all Americans from its concealed carry permit program soon could be headed to the U.S. Supreme Court.

The Second Amendment Foundation has asked the justices to hear the case Culp v. Raoul, which challenges the state's demand that those requesting concealed carry permit fall under the jurisdiction of its own review process – or another nearly identical.

Joining SAF in the suit are the Illinois State Rifle Association, Illinois Carry and nine private citizens. They are represented by attorney David Sigale of Glen Ellyn, Illinois, a veteran of Second Amendment cases in Illinois and elsewhere.

"This is a case that literally begs for Supreme Court attention," said SAF founder and Executive Vice President Alan M. Gottlieb. "When the court ruled in the 2008 Heller case that the Second Amendment protected a fundamental right, it was clear that this right belongs to everyone, not just the residents of an individual state. The Seventh Circuit held in Moore v. Madigan that the carrying of firearms in public for self-defense is a fundamental right, but under existing Illinois restrictions, that right has been limited to Illinois residents and citizens from only four other states.

"All the plaintiffs in this case are asking for is to be treated equally to Illinois residents," he added. "They’re not asking for special treatment. They will take the training required by state law and abide by all the other rules."

ISRA Executive Director Richard Pearson added: "It is unfair that people from out of state cannot get an Illinois concealed carry license. We intend to remedy that."

The state explains it accesses such information through its programs.

The court noted Illinois "cannot compel" that information, nor is it available in national databases.

So the state disqualifies from the program at the outset anyone whose state of residence does not have licensing standards "substantially similar to those of Illinois."

That means most residents of the United States.

"We're determined to make sure that all law-abiding citizens are not forced to leave their Second Amendment rights at the state border when they travel into or through Illinois," Gottlieb stated. "This is yet another example of trying to win back firearms freedom, one lawsuit at a time."

Recently, the courts struck down a gun ban imposed by the Illinois Housing Authority.

Illinois also recently faced possible court action because authorities were not addressing the need for personnel to process gun licenses.

Gottlieb said at that time, "A right delayed is a right denied.

WMAQ in Chicago reported at the time that it was taking up to 140 days for the state police to process applications for concealed carry licenses when it should take between 90 and 120 days.