Over a decade ago, when the Chuck Norris Facts or memes began going viral on the internet, even Google jumped onboard. To this day, if you type in a Google search bar, "Find Chuck Norris," then hit the "I'm feeling lucky" tab, it will yield the result: "Google won't search for Chuck Norris because it knows you don't find Chuck Norris, he finds you."

It was funny back then. Unfortunately, today, the part that says, "Google won't search for Chuck Norris" has become all too true. And there's one thing to blame: I'm a conservative with one of the most recognized names on the planet, and Big Tech has been in the business lately of suppressing even the biggest conservatives.

Before explaining my personal grievance with Google, let me catch up those who might not know of Big Tech's whitewashing of conservative thought and media on the internet.

According to Wikipedia, "shadow banning (also called stealth banning, ghost banning or comment ghosting) is the act of blocking or partially blocking a user or their content from an online community such that it will not be readily apparent to the user that they have been banned." The article then goes to cite several proven examples of it from the last few decades.

One internet news agency severely shadow banned by Google has been WND, and it's easy to prove. In fact, a must-read column on this issue is: "How Google demonizes WorldNetDaily," by author and veteran news investigator, award-winning journalist and managing editor of WND and Whistleblower magazine, David Kupelian. (I recently wrote a similar column on America's children: "Google's Overreach into Your Kids School Privacy.")

As Kupelian wrote, over the years WND has "chronicled the endless stream of conservative, Christian and pro-life organizations that social media platforms have banished, censored, shadow banned, de-monetized and otherwise suppressed from public view."

So, it's no surprise that starting at least a few years ago, Big Tech launched a cyberwar against WND through its vast digital tentacles.

Finding content on WorldNetDaily, which was around long before Google, Facebook, Twitter or other social media platforms and used to continually make top news placements every week on Google news, is like searching for Bigfoot or UFOs on search engine results.

Kupelian explained, "Today, you can get a quick, personalized snapshot of what has become of the internet by doing a simple Google search for 'WorldNetDaily.' Of the top 10 returns, seven are brutally condemning of the internet's oldest independent journalism website. First – even before WND's website itself! – comes the ridiculous Wikipedia article, written by rabid anti-WND folks who lead off by describing us this way: 'WorldNetDaily (WND) is an American news and opinion website and online news aggregator which has been described as "fringe" and far right as well as politically conservative. The website is known for promoting falsehoods and conspiracy theories.'"

That's such an unfair assessment when you have an amazing veteran news team like those at WND. I've worked with news agencies and media giants all my life, and WND is among the best. As a primary founding father of independent journalism on the Web, our friend, WND CEO and editor in chief Joseph Farah, has led a stellar team (like David Kupelian, Ron Strom, Bob Unruh, Chelsea Schilling and so many others) who have collectively busted their butts for over two decades bringing the internet world myriad of first-rate and breaking news reports and exposés. So many of them ended up being used and highlighted by major mainstream media hosts as well as led to countless major network radio and television interviews.

In addition, what does the Wikipedia-Google partner and slanderous definition about WND say about its columnists like Pat Buchanan, John Stossel, Star Parker, Tucker Carlson, Ben Shapiro, Ted Baehr, Pat Boone, Michelle Malkin, Greg Laurie, Dave Ramsey, Ann Coulter and me, among many others, who've written weekly columns for over a decade, covering every day of the week? Are we all "fringe" and conspiratorial, too? That's biased to the core and flat-out leftist lies and evil against WND. And they accuse WND of "falsehoods"?

WND hasn't been the only news agency hit by Big Tech shadow banning. Conservatives across the board have been censored by the latest and greatest cyber-algorithms assaults.

Doug Wead, a New York Times best-selling author and an adviser to two American presidents, discovered the hard way that his voice and media were being stifled too. He was special assistant to President George H.W. Bush, but found that his best YouTube videos couldn't be found, and new membership on his Facebook page had stopped simply because he posted videos of himself interviewed on Fox News. He shows multiple Google screen shots to prove his case here.

I've experienced similar shadow banning with Google searches of my conservative commentary. I've been writing "culture warrior" columns for roughly 13 years (more than 700 articles), and they used to easily surface at the top of Google news and other searches of just my name. But now they are like hunting for people in ghost towns unless you type in an exact title match of the article for the search. My culture warrior column popularity has actually grown, and additionally goes out weekly now to my over 6 million Facebook members, but still crickets chirp as I glance through Google news for them. While my literary popularity has grown, new Google algorithms appear to be constraining it.

A simple comparison between Google and other search engine search results of "Chuck Norris WND" shows bias against us both that a kindergartener can plainly see in the following screen shots. 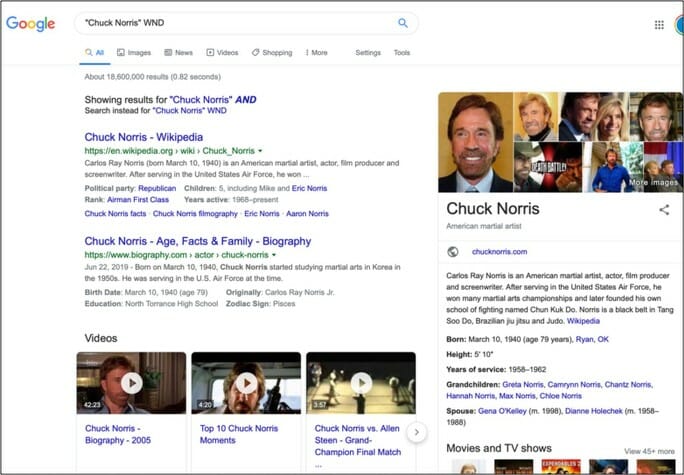 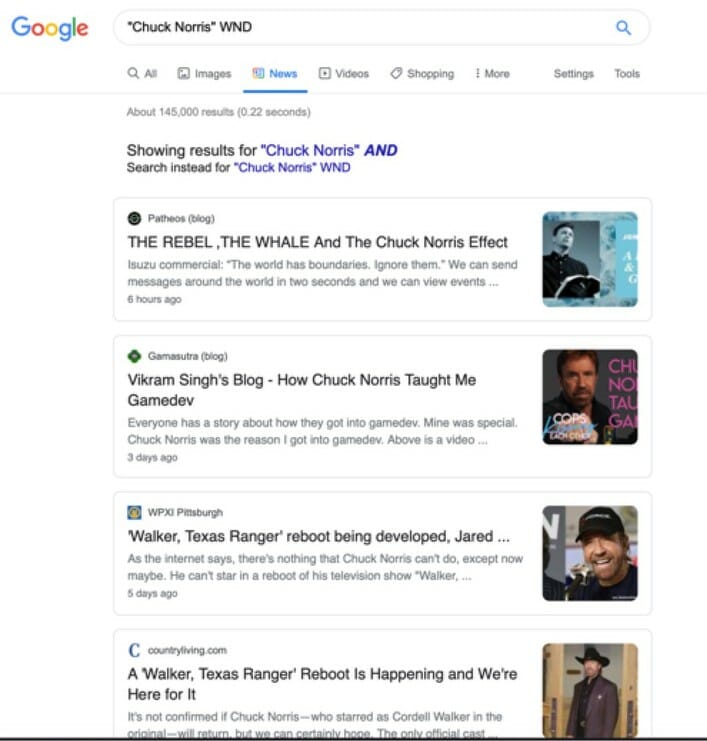 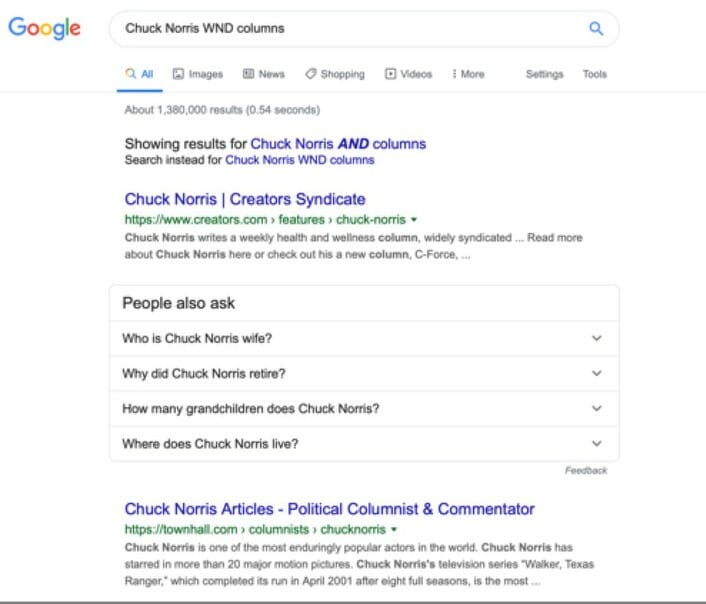 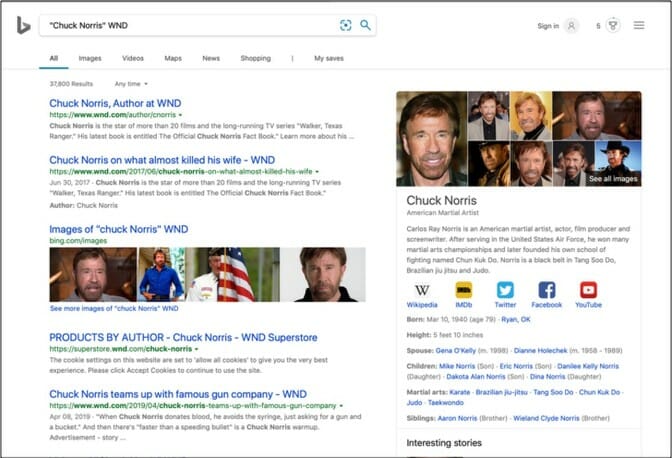 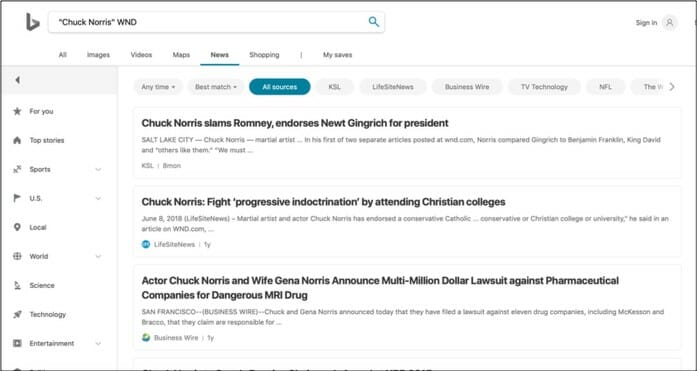 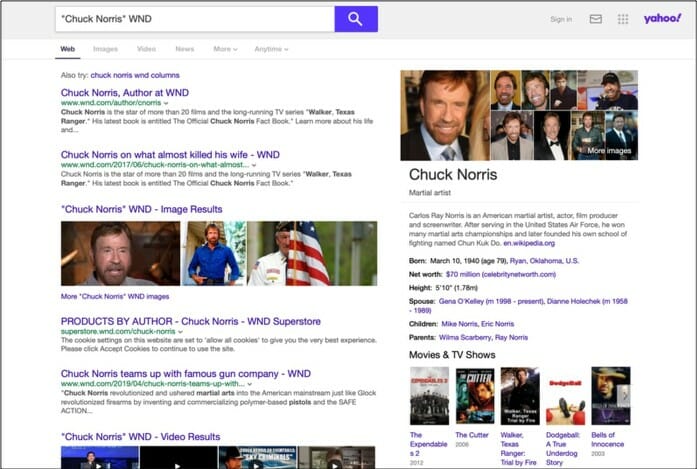 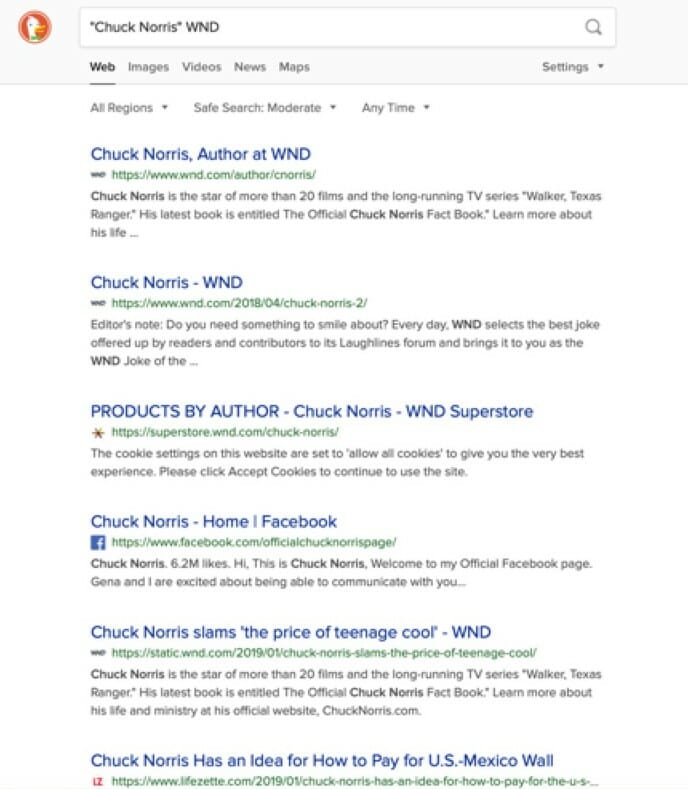 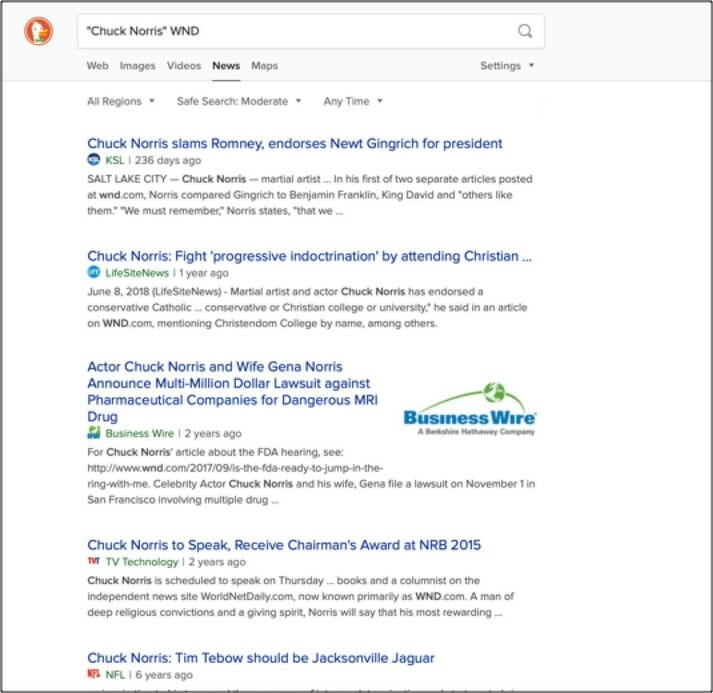 If it were not for shadow banning and the underlying dirty deeds of anti-conservative algorithms someone is implanting, how else could Google explain that Bing, DuckDuckGo and even Yahoo yield top and big WorldNetDaily results for a search on "Chuck Norris WND"? Is Google really going to say that the other smaller search engines can find WND in one click but Goliath can't, especially when I've been writing for WND for over a decade?

Here are two additional screen shots of a Bing search of "Chuck Norris in the news" from 2016 and 2017, where you can clearly see my WND columns topping the news. Compare them to today's Google search of the same heading. I actually scrolled through the first 20 pages of Google's 20,200,000 website hits for a single witness of my 13 years of WND columns, and I gave up without finding one. 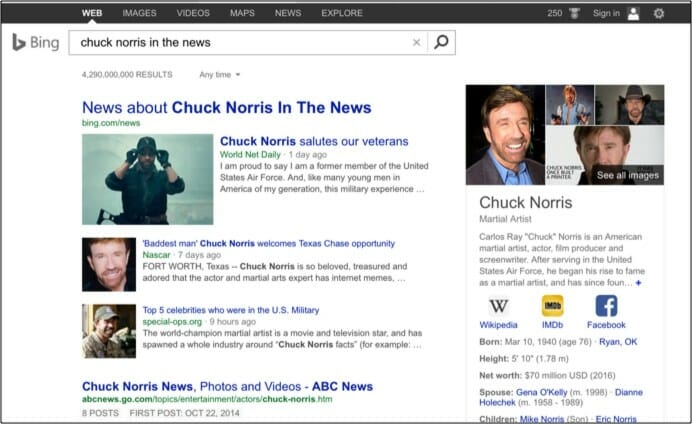 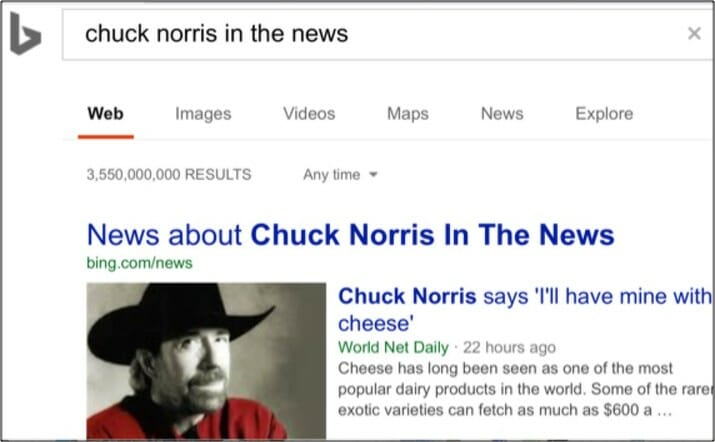 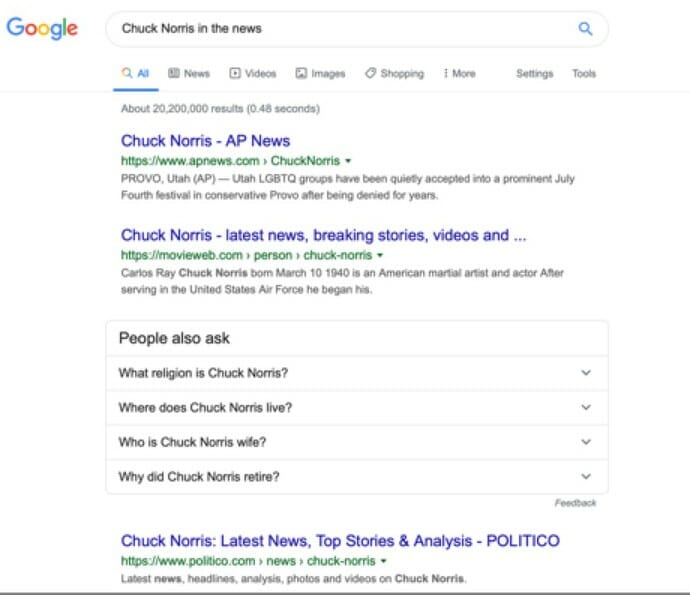 Not that I'm looking for more popularity, and I'm truly grateful and humbled by it all, but my name used to garner billions of hits during searches in 2016 and 2017 – and now try it. While my popularity and name has grown, my internet presence seemingly has diminished. Why?

Shadow banning is of course about much more than just me, my name or WND. I believe Big Tech's proliferating and progressive covert algorithms against conservatives across the board delete, restrict, denigrate and cripple our brands, enterprises and influence in our country and around the world. The fact is, shadow banning is indicative of a deeper systemic plan by all the big internet giants through their search engines to minimize or bring about irrelevance to people and companies, etc. they don't agree with. I wonder who was and is the mastermind(s) behind this plan?

I'd encourage all of my readers to personally make the comparisons for themselves. Go on Google and the other search engines, enter searches for conservatives and conservative agencies and advocates. and then watch how many negative or not-at-all reports appear. Observe how far you have to dig into the search pages of conservative issues or agencies for positive results.

My wife, Gena, and I couldn't agree more with Michelle Malkin who gave this immediate course of action we all must take if we are to reduce the power and overreaching tentacles of Big Tech Goliaths: "Wean yourselves – not just your kids – off Google. Try the Brave browser, DuckDuckGo search engine, BitChute video hosting service, Minds or MeWe social networking and ProtonMail."

We love the ad for DuckDuckGo.com: 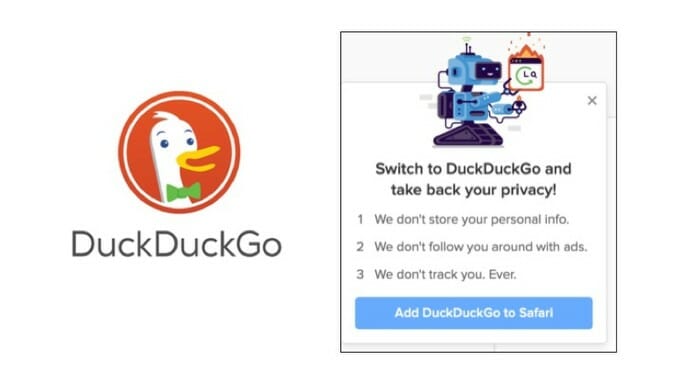 Trust me that shadow banning chaps our Texas hides, whether it's being done to us or others. As much as Gena and I disagree with the liberal platform, we don't want liberal voices to be muffled or shadow banned either. We just want the same fair treatment Big Tech appears to be giving them.

Shadow banning is not a right or left issue. It's not about being Republican or Democrat. It's about all of our First Amendment rights and freedom-of-speech liberties, and that they should never be silenced by Big Tech corporations or anyone else.

We too are freedom-loving patriots. We love God. We love our family and community. We love our country, and believe the only way to keep it the way our founders intended it is to keep it free for us and all future generations.

Thomas Jefferson said it best – words inscribed on the inside of his monument in Washington, D.C.: "I have sworn upon the altar of God eternal hostility against every form of tyranny over the mind of man."

Chuck Norris
Chuck Norris is the star of more than 20 films and the long-running TV series "Walker, Texas Ranger." His latest book is entitled The Official Chuck Norris Fact Book." Learn more about his life and ministry at his official website, ChuckNorris.com.
The fallen warrior to whom I dedicated my 'Missing in Action' films
How you can support families during Military Appreciation Month
America's founders' views on life in the womb
3 celebrations I'm looking forward to this week
U.S. 5th grader writes Russia's leader about imminent nuclear war
See more...