WATCH: here's the video of when 2 dozen GOP members, led by @mattgaetz entered the secure hearing room (SCIF) to interrupt witness testimony in the #ImpeachmentInquiry as they demand access, despite not being committee members. They're complaining it's a "Soviet-style process". pic.twitter.com/8KddYz3r9D

Complaining of a "Soviet-style process," more than a dozen House Republicans stormed a closed-door meeting Wednesday where Democratic lawmakers were questioning a Defense Department official in the impeachment inquiry into President Trump.

The incident caused a brief delay in the deposition, the Daily Caller reported.

Republicans have charged they are being shut out of proceedings
led by the Democratic-controlled House intelligence, foreign affairs and oversight committees. The Democrats allege Trump engaged in an illicit quid pro quo, threatening to withhold aid to pressure the Ukrainian president to investigate Hunter Biden's profiting from a Ukrainian firm while his father was President Obama's point man for Ukraine policy. The White House contends a transcript of the July 25 phone call with the Ukrainian president contradicts the hearsay-based claim of an anonymous whistleblower who has a bias against Trump, according to the intelligence community inspector general. Ukrainian President Volodymyr Zelensky and other Ukrainian officials insist they weren't pressured and had no knowledge of any delay in aid, which eventually was provided.

Prior to rushing the meeting Wednesday, Republican Florida Rep. Matt Gaetz told reporters according to a video posted on Twitter: "We're gonna go and see if we can get inside."

Democratic Virginia Rep. Gerry Connolly said, according to a Washington Post reporter via Twitter, the Democrats were "consulting Sargent at Arms" regarding the Republicans' action.

Connolly said the Republicans broke rules by entering the secure room with their electronics.

The Washington Times noted a number of Republicans have tried to access the depositions and get transcripts of the meetings.

Trump on Monday called on Republicans to "get tougher and fight" against the impeachment inquiry, urging them to "stick together" in his defense.

Romney said in an interview Sunday on "Axios on HBO" that Trump's actions in the July phone call were "shocking" and a "mistake."

"We certainly can’t have presidents asking foreign countries to provide something of political value. That is, after all, against the law," Romney said.

'We adopted every single' Democrat rule

In an interview with Fox News' Sean Hannity, Gingrich said that anybody "who really wants to see the truth" can read the documented, detailed account of impeachment manager Rep. Jim Rogan, R-Calif., in his book "Catching Our Flag: Behind the Scenes of Bill Clinton's Impeachment," published by WND Books.

"Rodino walked Rogan through how to do it so it was fair, it was open, it was worthy of the American people and reinforced the Constitution," he said.

"We adopted every single rule that Rodino used in 1973," said Gingrich.

A full House vote was held to authorize an impeachment inquiry and Gingrich allowed the Democrats to establish the rules, granting co-equal subpoena power to the ranking Republican member, requiring all subpoenas to be subject to the full vote of the committee and allowing the president's counsel the right to attend all hearings. The president's counsel had the right to present evidence, object to admitting certain evidence, cross-examine witnesses and recommend a witness list. 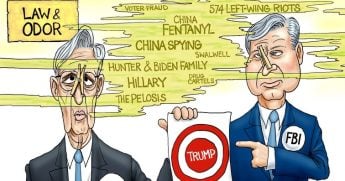