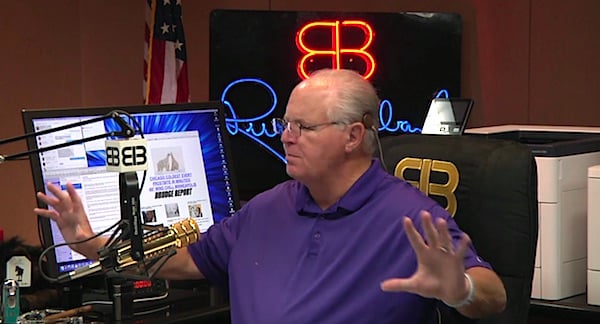 The real push for impeachment isn't coming from Democrats in elected offices, according to talk radio host Rush Limbaugh.

It's coming from the unelected Democrats in the media.

"They hate Trump because they failed in making sure he didn't win. Their candidate was Hillary. They were all-in for Hillary," Limbaugh told his listeners Friday.

"They did everything they could to make Hillary president to help her win. Trump beat them. Ah, ah, ah! Intolerable. So they hate him from the get-go for that. Next they hate him because they can't get rid of him any other way. They couldn't get rid of him during the campaign, they weren't able to reverse election results, so now they want him impeached."

Limbaugh noted House Speaker Nancy Pelosi is getting on with an "impeachment inquiry" without a full House vote, as required by the Constitution.

The White House has said, when you have a vote, let us know.

Limbaugh said one of the reasons Pelosi "is continually hounded is because the media wants this done."

Media members are "fed up" with the lack of progress, he said.

"Trump keeps talking about having the ChiComs investigate Biden, and it's driving 'em nuts. They think Trump's breaking the law right in front of their faces. They want Trump impeached yesterday, like AOC does. Except they're not willing to drop it like she is."

Trump explained on Friday that his suggestions that Ukraine and China investigate the Bidens isn't political. He argued that Joe Biden won't win the 2020 Democratic nomination anyway.

"This is all about corruption. If our government's engaging corruption in foreign countries, we gotta root it out," he said.

Limbaugh said the likely target is the corruption under the Obama administration, including the use of a bogus "dossier" funded by the Democrats to obtain warrants to spy on the Trump campaign.

"God, the level of corruption these Democrats have engaged in in Ukraine, to me, is boggling the mind. Who knew that Ukraine was the center of the corruption universe for the Democrat Party? But it is! And it isn’t just Biden! It’s Hillary people and many people in the Obama administration," said Limbaugh.

He called the media one of the most "glaring, egregious examples of groupthink I have ever seen in my life."