Both suicide and homicide rates among children, teens and young adults have increased an alarming amount, according to a new report by the Center for Disease Control and Prevention.

These heartbreaking statistics raise an important question: What is causing the increase?

While a specific cause was not identified, several experts believe excessive use of social media may be to blame.

Deaths due to suicide and homicide are "a major cause of premature death to persons aged 10–24 in the United States," according to the report published earlier this month.

The CDC says suicide was the second leading cause of death for people from 10 to 24 years old and homicide ranked as the third for those between 15 to 24 years old.

While those statistics are concerning enough, the steep increase of violent deaths for this age group shows just how prominent this issue is for our country's children, teens and young adults. 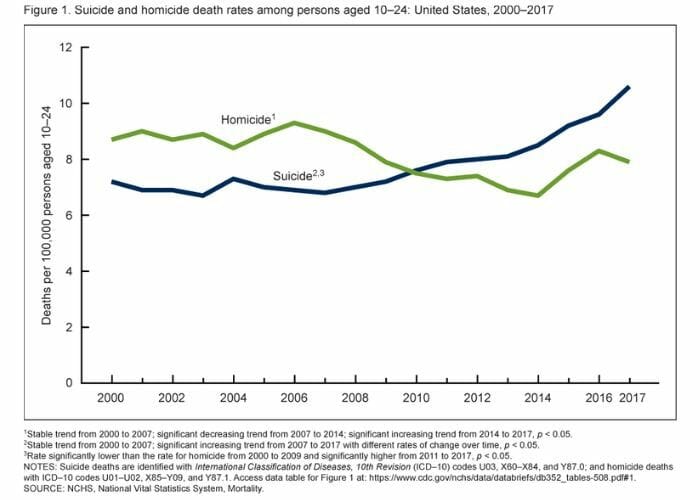 (Courtesy of the Center for Disease Control and Prevention)

What is even more concerning is that the suicide rates for children from 10 to 14 years old "nearly tripled" from 2007 to 2017 even though the rates for this age group are the lowest.

In fact, according to the report, the suicide rate for this younger age group was more than twice the homicide rate in 2017. 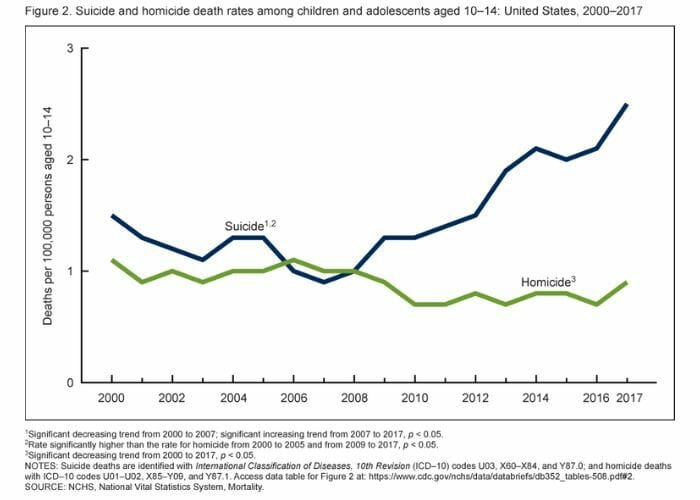 (Courtesy of the Center for Disease Control and Prevention)

While the report shows how prevalent deaths by suicide and homicide are for 10- to 24-year-olds, it doesn't point to a cause in the increases in suicide rates.

Experts, however, believe excessive use of social media may be to blame.

Caroline Oppenheimer,  an assistant professor of psychiatry at the University of Pittsburgh, told NBC News that teenagers are concerned about receiving enough validation from their followers on social media, especially "vulnerable" teenagers.

"We know that the teenage brain is very sensitive to peer feedback and social valuation and now with social media you can check your social status 24/7: how many followers you have, how many comments your post has gotten and how many likes,” Oppenheimer said.

“We know both girls and boys are heavily invested in monitoring social media. They get distressed when they don’t get a lot of likes or positive feedback.”

Dr. Igor Galynker, director of the Mount Sinai Beth Israel Suicide Research Laboratory in New York City, said this may be due to bullying that occurs on the different platforms, especially among girls.

"It’s known that girls are bullied online more than boys," he said, adding that increased screen time "is associated with increased rates of anxiety, depression and suicidal ideation."

Floyd Brown and Todd Ceffaratti argue in their recently released book, "Big Tech Tyrants," that tech companies should be held accountable for they believe is a clear contribution to the increased suicide rates.

"Does that mean society should accept these stressors as something we can do nothing about?” they asked in the book. “Or perhaps the stress agents should be treated like the accessories to murder they may well be?”

Dr. Albert Wu, from Johns Hopkins Bloomberg School of Public Health, told NBC News the new CDC report "represents a silent epidemic that’s been going on for more than 10 years in the U.S. and which has been gaining force" among our children, teens and young adults.

"Suicide is an enormous problem hiding in plain sight, perhaps in part, because we are reluctant as a society to talk about it," he said.

Collin Kartchner, an advocate for decreased screen time for teens, told The Western Journal in July that increased social media is a big contributor to the "national public health crisis."

"There are a lot of great kids that are using social media to do great things, but for a majority of them, it’s ruining their lives," he said.

Experts agree that the best way to help your loved ones is to learn the warning signs that suggest they may be having suicidal thoughts.

According to the Suicide Prevention Lifeline, signs can include an increased conversation about death, feeling hopeless and more.