Americans are daily confronted with the fact that their nation's most beautiful cities, from San Francisco to Seattle, have become crime-and-rat-infested hellholes littered with drug syringes and human waste, ushering in a resurgence of long-conquered medieval diseases like typhus.

Only the few honest journalists left will acknowledge the obvious – that all of these cities have been run for decades exclusively by the Democratic Party, whose policies have led directly to the current chaos.

And yet, the scandalous state of America's top cities is just the tip of the iceberg, a small part of a much larger problem of ever-growing lawlessness being visited on America by the Democratic Party.

The reality of the left's mysterious relationship with chaos and anarchy is deep and all-pervasive. As vividly documented in the September issue of WND's acclaimed monthly Whistleblower magazine, a full-bore assault by the left on the constitutional, moral and scientific laws that govern and safeguard every aspect of Americans' lives is rapidly transforming the nation.

The issue is headlined "THE LAWLESS ONES: Why today's Democrats champion legal, moral, economic and scientific anarchy." 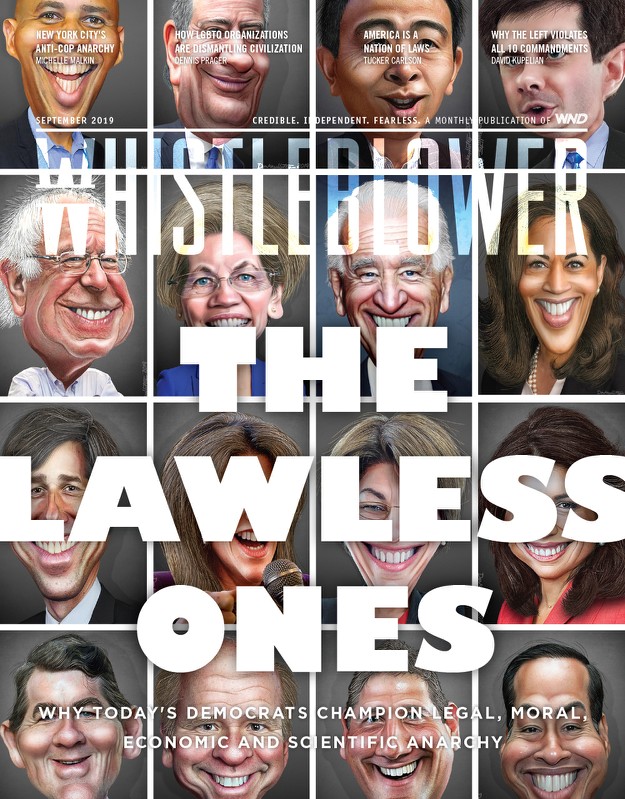 * For almost three years, purveyors of the "Trump-Russia collusion hoax" turned every sacred legal principle of American jurisprudence on its head in attempts to overturn a free and fair presidential election. Now they are reprising their attempted coup d'etat with the "Trump-Ukraine collusion hoax."

* Democratic presidential candidates demand that incarcerated felons including mass-murdering terrorists be allowed to vote. Sen. Bernie Sanders was asked specifically whether Boston Marathon bomber Dzhokhar Tsarnaev – convicted of planting pressure-cooker bombs filled with nails and ball bearings at the 2013 Boston Marathon, killing three people and wounding and maiming 280 others – should be allowed to vote. His enthusiastic answer: "I think the right to vote is inherent to our democracy. Yes, even for terrible people."

* Democrats' policy positions with regard to illegal immigration – de facto open borders, the virtual elimination of border police including the outright dismantling of ICE, the creation of "sanctuary" cities, counties and states for the purpose of shielding lawbreakers from law enforcement, the refusal to build border barriers no matter how urgent and lifesaving the need, the invitation to essentially everyone in the world to come to America for free taxpayer-funded healthcare – all this is not only immoral and deranged, but suicidal.

* Law enforcement, from federal to local, is under relentless attack from the left. A string of outright "racist-cop" hoaxes – from Trayvon Martin to Ferguson – created the Black Lives Matter movement and today's ever-expanding indictment of all white cops as racists. The resulting "Ferguson Effect" has been a documented rise in violent crime in the nation’s largest cities, especially murders and shootings of black victims, as a result of officers backing off proactive policing policies like "stop and frisk" after witnessing fellow cops' lives destroyed through career-ending public vilification, lawsuits and bogus prosecution for just doing their job.

* Leftist billionaire George Soros has been bankrolling the election of social justice warrior district attorneys across America, whose failure to prosecute crimes committed by minorities has caused a documented rise in crime rates.

* Democrats also want to liberate themselves from the laws of scientific reality. They deny the most incontrovertible core biology of male and female, affirming outlandish fake-science such as the existence of over 100 different genders. Likewise they obediently insist without evidence that the earth will become uninhabitable in 12 years unless America adopts the radical socialist Green New Deal. Sadly, they also are traumatizing an entire generation of America's schoolchildren, not only confounding them into believing boys can become girls and vice versa, but emotionalizing and frightening them into believing they might not have long to live. All the while, they smugly claim to be "the party of science," mocking and reviling all who oppose their madness as "anti-science bigots."

* Worse than all of the foregoing, virtually every Democratic presidential candidate enthusiastically approves the killing – for any reason, or no reason at all – of American children right up to the moment of their birth at nine months, and in some cases even after the baby is born. They don't simply approve it. They celebrate all abortion – or as they prefer to call it, "women's reproductive freedom" – a ghoulish euphemism for what in reality is pre-born child murder. Yet they insist it is the most enlightened human rights achievement of our age, and if you disagree, you're immoral and bent on denying women their constitutional rights.

Highlights of "THE LAWLESS ONES" include:

"Laws created by man – good laws, anyway – are based on largely self-evident moral law, God's law," says Whistleblower Editor David Kupelian. "Thus we make laws against stealing because it's wrong to steal, and we have laws against murder because murder is wrong, predatory and against God's law. And so on. Yet in seemingly every area of life, today's far-left Democrats are stridently rebelling against the law – because underlying it all, the truth is they are rebelling against God and His law."

You'll get a hardcover copy of "The War on Police: How the Ferguson Effect is Making America Unsafe" by Jeff Roorda.

It's one of the most important, disturbing – and ultimately most dangerous – news trends of our time: the demonization and targeting of America's policemen and women.

In the wake of the highly publicized shooting of Michael Brown after he robbed a store and attacked Officer Darren Wilson, the media and race-baiters immediately vilified the police. Even though the U.S. Justice Department, having reviewed 35,000 pages of records and forensic evidence and conducted hundreds of interviews, was forced to exonerate Officer Wilson, that meant nothing to angry protesters and the political and media elite. The Obama administration chose to “let the embers of civil unrest burn, fanned by the rhetoric of opportunistic race dividers,” says the president of the Law Enforcement Legal Defense Fund. Indeed, the battle lines had already been drawn and the attacks on police that followed Michael Brown’s death and Officer Wilson’s acquittal have since mushroomed into an all-out war.

Complete with an exclusive one-on-one interview with Officer Darren Wilson, "The War on Police" starts by setting the record straight about the realities on the ground in Ferguson, repudiating the shameful movement against police. Author Jeff Roorda was law enforcement’s most outspoken champion throughout the grueling ordeal in Missouri, offering a unique perspective on the impossible situation police departments nationwide encounter as they face off against the media, politicians, protestors and criminals. Roorda analyzes how the media perversely continue to slant story after story, attacking the methods police use to protect communities and themselves from criminals, despite the reality that before the Ferguson incident, crime had been declining for two decades. Yet after Ferguson and the war on police it ignited, violent crime has surged in cities across the country.

"The War on Police: How the Ferguson Effect Is Making America Unsafe" examines how fear of retaliation from politicians has seriously restricted police efforts to stop the thugs. Roorda looks at major cities across the country and shows how the bad guys – who know the police are now afraid to show force – are running rampant, leading to a sharp increase in thefts, shootings and other crimes. The cops are maligned alternately for using too much force, and then for not stopping the violence. This dangerous war against the nation's police departments is making America increasingly unsafe and, ironically, turning our streets into war zones.

About the author: Jeff Roorda, a retired police officer and a four-term Missouri State Representative, currently is the business manager for the St. Louis Police Officers Association, the union that represents police in St. Louis, Missouri. In the wake of the shooting of Michael Brown, Roorda was the go-to police commentator for CNN’s coverage of the Ferguson incident and its aftermath, appearing on ABC, CNN, FOX and other news networks.

If you prefer, you may order a single copy of the September 2019 issue, "THE LAWLESS ONES." Or GET THE DIGITAL VERSION HERE!