Actor Tom Arnold seemed to threaten the possibility of an assassination attempt in a tweet Thursday evening after President Donald Trump arrived in Dallas, Texas.

The president had tweeted a video of a crowd waiting for his rally at the American Airlines Center on Thursday evening.

Arnold tweeted in response, "Don't get too cocky traitor. They showed up for JFK too." 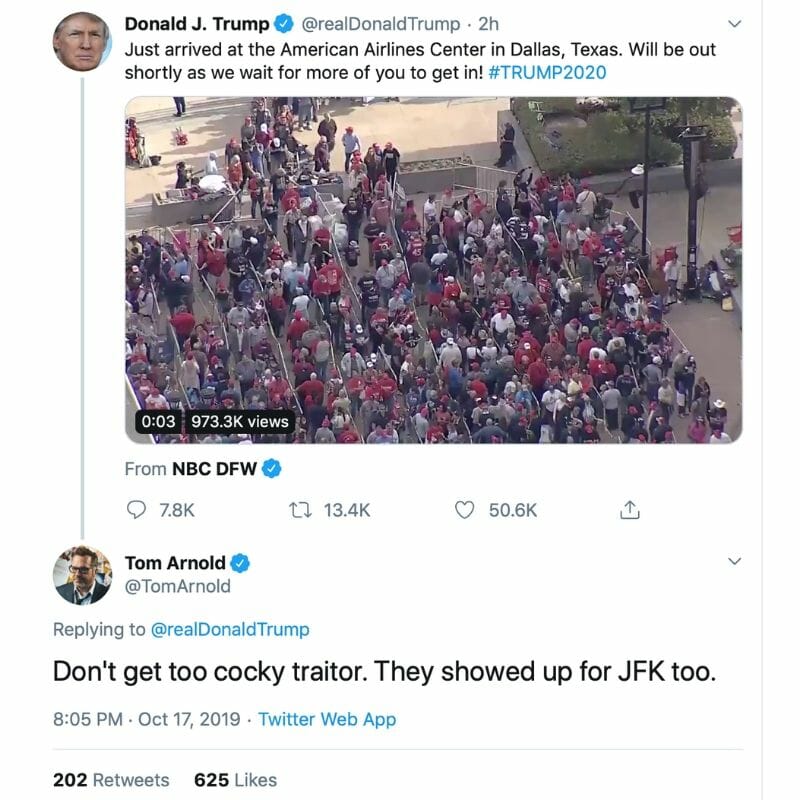 Arnold's tweet appeared to be a reference to President John F. Kennedy's assassination.

Kennedy was assassinated on Nov. 22, 1963, during a campaign visit in Dallas, according to History.

The president was shot while his motorcade drove through crowd-lined streets.

Although the man was licensed to carry the weapon, he was still taken into police custody.

When a Twitter user responded to KXAS-TV's reporting of the arrest, asking if the man in question was Arnold, the actor responded, "I don't own a gun. I'm a real man."

I don't own a gun. I'm a real man. I will wrestle the traitor at his next rally if he's willing. He's in the WWE Hall Of Fame. For what? Extortion? Cowardice? Definitely not being a patriot. You support Donald Trump now. You are UnAmerican too.

Arnold's JFK tweet is no longer available; Twitter has replaced it with its disclaimer that it violated the social media platform rules.

This is not the first time the actor has seemingly threatened Trump.

Arnold was questioned by the Secret Service last year for challenging the president to a fight on Twitter, Yahoo Entertainment reported at the time.

"I say put up or shut up @realDonaldTrump Me vs You. For America. First body slam wins. Any Rally. Any Time. Between now & the midterms," Arnold tweeted.

Arnold filmed the conversation he had with the Secret Service agents last year and gave the footage to Mother Jones.

"You're free to say whatever you want to say within certain boundaries," one agent said, reiterating that they are not the "First Amendment police."

"In your type of case, what we're concerned with a lot, too, is the audience it can reach, that it could incite somebody to do something," the agent said.

"You see a lot of times when we’ve had previous attempts on the president’s life, they got motivated by somebody."