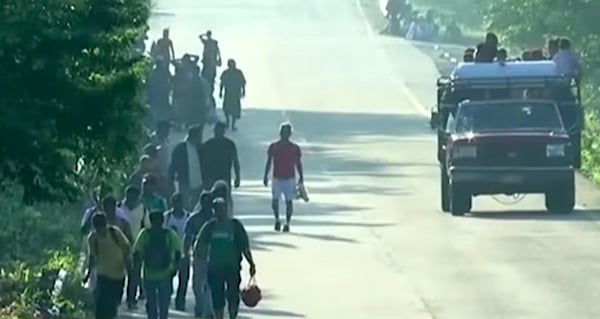 Trump administration officials are touting the success of the "Remain in Mexico" policy, estimating tens of thousands of illegal immigrants with bogus asylum claims have given up and returned home.

The Washington Times reported that of the 55,000 migrants who were subject to the program, a "small subset" have won their cases and been readmitted to the U.S. to proceed with asylum claims.

Another 20,000 are still waiting in northern Mexico,

Homeland Security officials believe another 20,000 are still waiting in northern Mexico, meaning tens of thousands are believed to have given up their claims.

But Homeland Security emphasizes an even more important impact of the policy: the dramatic drop in the number of illegal immigrant families taken into custody at the U.S.-Mexico border.

The number nabbed at the border has been cut by 80% from a record high in May, the Times reported.

A process that previously took years now can be accomplished in only a few months.

Under the old system, asylum seekers were allowed to enter the United States and roam free while their claims were being process.

Under the new system, they must pass an initial screening to be granted protection or relief and allowed to enter. Most don't pass the initial screen or give up their claims on their own.

The program applies to non-Mexicans who travel through Mexico to reach the U.S.

The Trump administration has emphasized that people from the troubled countries of Honduras, Guatemala and El Salvador could claim asylum in Mexico. The fact that they continue to the United States suggests they should be regarded as illegal immigrants seeking jobs or reunification with families.

Neither of those reasons are among the qualifications for asylum under U.S. law.

The Times noted that immigrant-rights activists who oppose the "Remain in Mexico" policy contend it has created dangerous conditions in northern Mexico for migrants who are easy prey for criminals.

Homeland Security argues it's a hemisphere-wide policy that is supported by Mexico and key Central American countries.