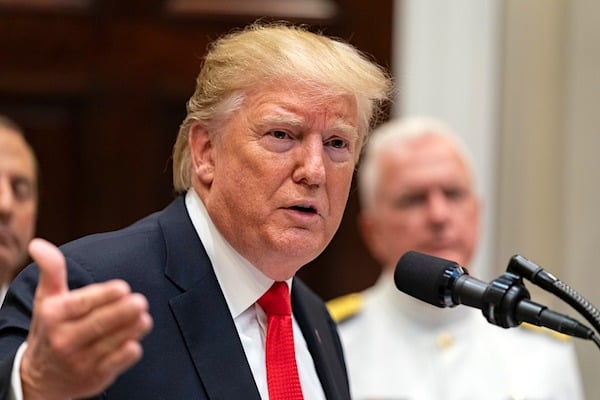 President Trump reacted to a New York Times report Wednesday that House Intelligence Committee Chairman Rep. Adam Schiff, D-Calif., learned details of the CIA officer's allegations against the president days before the whistleblower complaint was filed, calling it a "scandal."

"I think it's a scandal that he knew before," Trump said at a press conference at the White House with Finnish President Sauli Niinistö.

"I'd go a step further, I think he probably helped write it," Trump said of the complaint.

The Times cited a spokesman and current and former American officials.

Responding to the Times story, Schiff spokesman Patrick Boland did not deny that the chairman had prior knowledge of the allegations.

"Chairman Schiff does not know the identity of the whistleblower, and has not met with or spoken with the whistleblower or their counsel," he said, according to Fox News reporter Chad Pergram.

House Speaker Nancy Pelosi has appointed Schiff to lead an "impeachment inquiry" into President Trump's July 25 phone call with Ukrainian President Volodymyr Zelensky, although the full House has not voted to authorize a formal impeachment proceeding.

The Democrats allege Trump engaged in a quid pro quo, threatening to withhold aid to Ukraine if the country's leader did not investigate Hunter Biden's receipt of millions of dollars from a corrupt Ukrainian company while his father was the Obama administration's point man for relations with the country.

The White House argues that a transcript of the phone call released after the impeachment inquiry began does not support the quid pro quo claim. And two divisions of the Justice Department concluded after a review that Trump did not break any laws.

At the news conference Wednesday, Trump pointed out that Zelensky has stated that there was no pressure exerted on him in Trump's request to "look into" the Biden allegations.