President Trump has reportedly voiced his desire to leave NATO on several occasions, sparking concern in some circles; however, he is absolutely right to conclude that it is in the U.S. national security interest to do so. The time has come for a revolutionary new U.S. grand strategic initiative that brings an end to the old great power alliance systems that transformed two regional wars into world wars, resulting in the unnecessary deaths of tens of millions of people. While the NATO alliance proved crucial in deterring Soviet aggression during the first Cold War, it has since become a noose around the neck of U.S. policymakers. This is due to the fact the U.S. is currently obligated to risk a likely nuclear World War Three with Russia over the Baltics and/or Eastern Europe, areas that do not constitute U.S. vital interests.

What is most needed right now is a comprehensive proposal to renegotiate and replace the current bi-polar international order with a new tri-polar international order, based upon recognized spheres of influence for each nuclear superpower, which better reflects the balance of power that exists in the world today. The U.S. would agree to withdraw from NATO in exchange for Russia and China ending their 2001 Treaty of Friendship and withdrawing from their Shanghai Cooperation Organization (SCO) military alliance, which Putin has referred to as "a reborn Warsaw Pact." Both alliances could continue to exist with exclusively non-great powers serving as members and NATO being transformed into a European-led alliance. 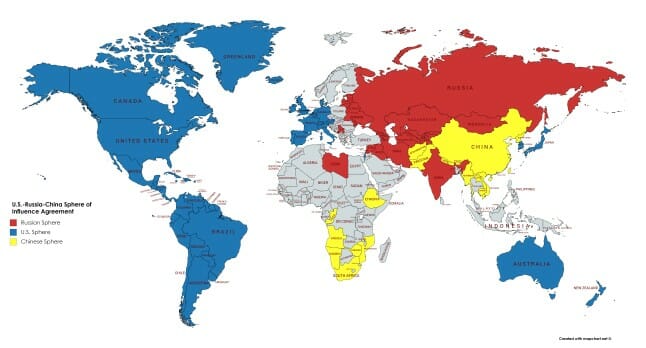 A U.S. sphere of influence might include North & South America, Western Europe, Israel, Japan, South Korea, Australia and New Zealand. The Russian sphere of influence could encompass all of the former Soviet Republics, Serbia, Mongolia, India, Libya, Syria, Lebanon, Iran and Iraq. A Chinese sphere of influence might include Taiwan, North Korea, the South China Sea, Pakistan, Afghanistan, Nepal, Bhutan, Myanmar, Laos, Cambodia and Vietnam and various Marxist/Communist-led republics in Africa. A "buffer zone" could be established in Eastern Europe between the U.S. and Russian spheres consisting of non-aligned states to prevent future conflict.

As part of the agreement, the U.S. would agree to withdraw all of its troops from Central Asia, the Middle East, South Korea, Eastern Europe and all of its ground troops from Germany and Japan while maintaining its nuclear/defense umbrella over all of the nations within its sphere of influence. The U.S. would mediate the signing of a peace treaty ending the state of war between Russia and Japan. It would also support the signing of a reunification agreement between the PRC and Taiwan, which would receive the same rights Hong Kong currently enjoys. This would help ensure that a reunification took place peacefully while attempting to maximize the freedoms and autonomy of Taiwan under the agreement. In exchange for the signing of a peace treaty ending the Korean War and withdrawal of all U.S. troops from South Korea, North Korea would undergo a nuclear freeze and end all of its nuclear and missile tests. Before U.S. forces withdrew, North Korea would have to crash its two super-Electro-Magnetic-Pulse (EMP) satellites orbiting over the U.S. (or allow the U.S. to shoot them down), followed by the verified dismantlement of its Yongbyon nuclear research center and all nuclear weapons production facilities.

A U.S. withdrawal from NATO and of all U.S. ground forces from continental Europe would be made conditional upon an end to all Sino-Russian military assistance, arms sales and cooperation. In the event that Russia or China violated the agreement by attacking a non-aligned nation or engaging in military cooperation or arms transfers, the U.S. could announce it was rejoining NATO and redeploying its nuclear and conventional forces to Europe and Japan.

While this proposed agreement would not be without political risks, President Trump has made a name for himself as a renowned negotiator and skilled dealmaker and is exceptionally well-suited to negotiate a sphere of influence agreement with both Russia and China that safeguards U.S. national security. In so doing, he would not only have an opportunity to secure his presidential legacy as a transformational Peace President, but could likely use this foreign policy triumph to ensure his re-election as well. In addition, he would likely be awarded with a Nobel Peace Prize for creating the necessary conditions for an enduring peace between the superpowers that could very well last a century – much as the Congress of Vienna did over two centuries ago – for which future generations of Americans would be deeply grateful. 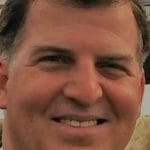 David Pyne
David T. Pyne, Esq. is a former U.S. Army combat arms and H.Q. staff officer with a M.A. in National Security Studies from Georgetown University. He currently serves as a member of the Utah Advisory Committee of the United States Global Leadership Coalition and as Utah Director of the EMP Task Force on National and Homeland Security. He can be reached at [email protected].
Trump could win Peace Prize with this tri-polar deal
See more...