MANJIB, Syria – The city of Manjib in northeastern Syria has become a focal point for those who have attacked President Trump for pulling American troops from Syria.

Newspaper columnists, internet bloggers and even senators have accused President Trump of "abandoning the Kurds" and pointed to Syrian government troops moving into the city of Manjib as proof.

The city of Manjib is 80% Arab. It is not Kurdish at all. During the time American troops were in northern Syria, the city of Manjib was given to the Kurds to administer. No Arabs were allowed in the city administration. The majority Arab population was informed that they had to learn Kurdish to do business with the city.

After the American withdrawal, people flooded the streets of Manjib to welcome the Syrian Arab army, waving Syrian flags and holding up portraits of President Assad. In the northern part of the city, Russian military police patrolled between the Syrian army to the south and the Turkish army to the north of the city. 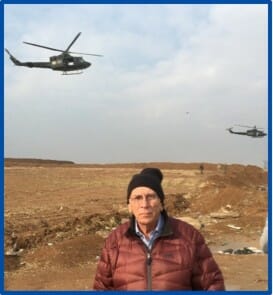 William Murray on the Nineveh Plain in 2016 as fighting continued with the Islamic State. American gunships in background at Iraqi checkpoint.

Posted videos show the Arab population waving and cheering the Russian police. They viewed the departing Kurdish-controlled SDF as oppressors not saviors. (The USA established the Syrian Democratic Forces or SDF. Beside Kurds the SDF has Sunni Muslim units from Chechnya, Russia, who fought the Russian government there in an uprising.)

This is not new. Kurds have historically repressed and even massacred Christians in Syria and Iraq. They participated in the Armenian genocide.

The mainstream media have for years portrayed the Kurds as angels who have never committed a crime at any time in history. Many American Christians honestly believe the Kurds are Christians when in fact they are for the most part Sunni Muslims, except for the PKK (Kurdish Workers Party), which is Marxist and on the U.S. terror list.

On the positive side, the Iraqi Kurds do, for the most part, currently lean to the secular. But the aid the United States sends directly to the Kurdish Administration in northern Iraq never trickles down to the Christian population.

Erbil, Iraq, is under Kurdish control. New construction is everywhere, and the water and sewage systems are first-rate thanks to American taxpayer money. That is not true, however, in the Christian town of Ankawa next to the Erbil airport. The streets are bad, the water supply is not reliable, and the town has the odor of a poor sewer system. Power outages are the norm.

President Trump has promised aid to religious minorities in Iraq, but the results are sparse.

In mid-October a reporter with Reuters interviewed me about President Trump's withdrawal of American troops from Syria. It appeared to me from his questions that he had an agenda to criticize the president and hold the Kurds up as heroes.

I told him the Kurds were a minority in the "Kurdish area" of Syria established by the United States and that their fighters were being paid by the U.S. to block oil from being pumped from the rich oil area of Syria to the area held by the Syrian government.

As an example, I pointed out that the city of Manjib was 80% Arab and that they were prohibited by the Kurds from participating in any public office. I informed him about a National Review article on the persecution of Christians by Kurds in Syria.

The National Review article stated that a Christian official in the Kurdish controlled area confirmed the school closures. The article stated, "… the Kurdish self-administration is actively harming the prospects of Assyrian survival in Syria through its attempted overhaul of the education system, forced conscription in the Kurdish-aligned YPG (People's Protection Units, a militia), parallel tax systems that double the tax Assyrians pay, and extensive harassment and intimidation of Assyrians who resist their policies."

The reporter appeared shocked to learn that Kurds were the minority in the area east of the Euphrates River they controlled and that the Syrian government had no access to their oil fields in that region.

The next day the article appeared nationwide, and just one line was a quote from me. None of the information I furnished to him was used.

For now, the Kurds in northern Iraq appear to respect our government. Of course, we give them hundreds of millions of dollars a year to pay respect to us.

The Kurds in Syria appeared to respect us as we were handing out cash and protecting them. As our troops pulled out of the Kurdish area this month, they were pelted with eggs, rotten fruit and potatoes. The videos are on the internet, and they are genuine and mentioned by the Associated Press and other news outlets.

Too often respect in other countries for our nation and for our brave men and women in uniform lasts only while we are handing over cash to corrupt bureaucrats who make themselves rich first and then take care of those closest to them next. In Muslim countries that means the Christians get nothing our nation intended for them.

As for the Trump pullout from Syria, that lasted a few days – until the Deep State operatives around him convinced him to move hundreds of troops and tanks to eastern Syria to "protect" the Syrian oil fields from the Syrian government.

The overall Trump administration position on Syria is still that of the Obama/Clinton regime, which is to strangle the population in government-held areas of Syria by cutting off fuel for even essential emergency services. The goal is to "punish" Assad by cutting off access to food, fuel and medical services for the general population. For several administrations this has become the "go to" policy to deal with nations the Deep State views as antithetical to global American policy goals.

Note: William J Murray's Christmas for Refugees program helps to bring the Gospel and aid to Syrian and Iraqi refugees in the Middle East.