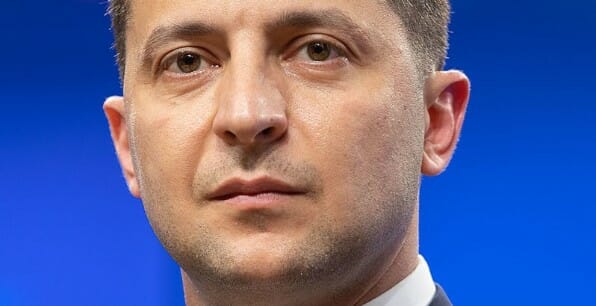 Ukrainian President Volodymyr Zelensky told reporters in Kiev on Thursday he was unaware of the U.S. decision to withhold military aid prior to the July 25 phone call that now is at the center of the House Democrats' impeachment inquiry.

"There was no blackmail," Zelensky said during a press conference on Thursday,according to the Independent of London. "I had no idea the military aid was held up."

Prior to a bilateral meeting at the United Nations General Assembly on Sept. 25, Zelensky declared that "nobody pushed me" to start an investigation into the Bidens.

On Thursday, Zelensky also responded to the Democrats' charge that he was pressured to cooperate in exchange for a meeting in the White House.

He said he was "conscious" of the need for a meeting, because "relations were tired."

"They wanted to know where their cash had gone," he said regarding Ukraine's inability to account for the spending of U.S. aid. "This is American taxpayer money, a sacred thing."

On the campaign trail in New Hampshire on Wednesday, Joe Biden for the first time called for Trump to be impeached, charging the president has "already convicted himself."

"President Trump has indicted himself by obstructing justice, refusing to comply with the congressional inquiry, he's already convicted himself," he said. "In full view of the world and the American people, Donald Trump has violated his oath of office, betrayed this nation and committed impeachable acts," Biden said at the town hall.

Trump fired back on Twitter, characterizing Biden's call for his impeachment as "pathetic."

"And I did nothing wrong," Trump wrote. "Joe's Failing Campaign gave him no other choice!"

On Tuesday, in a letter to House Democrats, the White House announced it would not cooperate with what it called an illegitimate effort "to overturn the results of the 2016 election."

Meanwhile, in an op-ed for the New York Times, author and investigative journalist Peter Schweizer called on the federal government to investigate the Bidens' dealings in Ukraine and China based on evidence he uncovered in his 2018 book "Secret Empires: How the American Political Class Hides Corruption and Enriches Family and Friends."

Schweizer shows Hunter Biden received millions of dollars from Burisma as a board member, despite having no experience or expertise in the natural gas industry. Meanwhile his father, as vice president, directed $1.8 billion in aid money to Ukraine.

The other country that Obama put Joe Biden in charge of regarding policy was China.

In 2013, 10 days after Joe and Hunter Biden flew aboard Air Force Two to China, Hunter's newly formed investment firm announced a private equity deal with the Chinese government in which about $2.1 billion now had been invested.