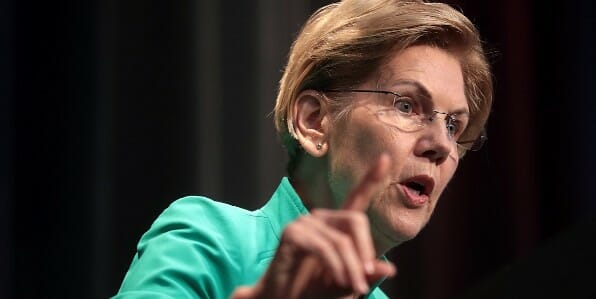 A story Elizabeth Warren told lightheartedly in a eulogy of a fellow law professor in 1997 was repeated in a TV interview 20 years later by the Democratic senator as a #MeToo moment of sexual harassment.

The Washington Post reported in a profile Wednesday of the presidential candidate that the professor, Eugene Smith, had asked her to speak at his funeral.

"With a smile on her face and humor in her voice, Warren described how Smith had invited her to his office one day just a few months after she had been hired (in 1978). He shut the door and lunged for her, she said, and as she protested, he chased her around his desk before she was able to escape out the door," the Post said.

The Boston Globe reported Warren "spoke fondly of law professor Eugene Smith and told the gathered mourners she was laughing as Smith chased her around his desk," citing a colleague's memoir.

But when Warren told the story again in a 2017 interview with NBC's "Meet the Press" in the wake of the #MeToo movement, she cast Smith and the incident in a completely different light.

"Yes, I have a MeToo story, too," Warren said. "I was a baby law professor and so excited to have my first real teaching job."

She said "this senior faculty member who, you know, would tell dirty jokes and make comments about my appearance, and one day he asked me if one day I would stop by his office."

"He slammed the door and lunged for me," Warren said. "It was like a bad cartoon. He's chasing me around the desk trying to get his hands on me. And I kept saying, 'You don’t want to do this, you don't want to do this, I have little children at home, please don't do this.'"

Warren said that "at the same time what was flickering through my brain was, 'If he gets hold of me, I'm going to punch him right in the face.'"

She said that when she finally escaped and returned to her office, she "shook."

Warren claimed she "never said a word" about the incident to anyone besides her best friend.

In an article after the 2017 "Meet the Press" interview, the Boston Globe asked Warren why she treated the incident so lightly in the eulogy.

"It was 20 years later, and he didn't have power over me anymore," she said. "I made it clear that I was just fine."

The Houston Chronicle said that in the audience at the funeral were Smith’s ex-wife, his three adult sons and John Mixon, a retired UH professor who had been close friends with both Smith and Warren.

Mixon described everyone in attendance as "slack-jawed."

He said Warren's story didn't seem plausible because of Smith's limited mobility due to polio.

"To have this image of him chasing her around the desk, it was just comical, and she told the story without rancor," Mixon said.

Warren for years claimed she was Native American before a DNA test showed otherwise.

Then, last week, the Washington Free Beacon refuted Warren's repeated claim on the campaign trail that she was fired as a schoolteacher in 1971 because she was "visibly pregnant."

School records obtained by the paper show she resigned after the Riverdale Board of Education in New Jersey approved a second-year teaching contract for her.