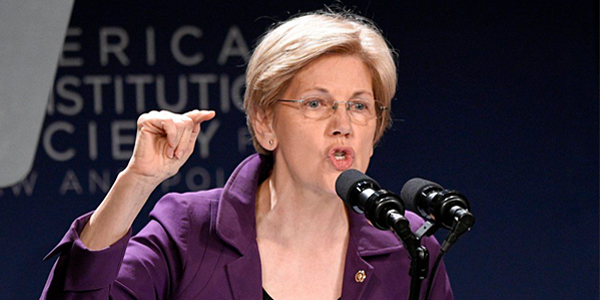 Sounding a lot like what Democrats have accused President Trump of doing with Ukraine, Democratic presidential hopeful Elizabeth Warren has threatened to withhold U.S. aid from Israel.

That could happen, she said, if the Jewish state doesn't do what she wants, should she be elected.

The Washington Examiner reported she warned Israel, America's closest ally in the Middle East, that she wants its construction of settlements in the West Bank to stop.

The Examiner said Warren was asked after a town hall in Iowa whether she was open to making U.S. aid conditional on an agreement with Israeli Prime Minister Benjamin Netanyahu to halt the construction.

The West Bank is home to about 3 million Palestinians and some 400,000 Jews.

Warren responded: "Right now, Netanyahu says that he is going to take Israel in a direction of increasing settlements. That does not move us toward a two-state solution. It is the official policy of the United States of America to support a two-state solution. And if Israel is moving in the opposite direction, everything's on the table."

Israel took over control of the West Bank from Jordan in 1967 when it defended itself against multiple attackers and won the Six-Day War.

Democrats are basing their impeachment inquiry of Trump on the allegation that with the threat of withholding U.S. aid, he pressed the Ukrainian president to investigate Hunter Biden's profiting in Ukraine while his father was the Obama administration's point man for the country.

Last week, acting White House Chief of Staff Mick Mulvaney argued it's common to us America's influence as a negotiating point for persuading other nations to behave better.

He insisted, however, there was no wrongdoing by President Trump.

He explained Trump's concern about Ukraine and the Democratic National Committee's hacked server was not connected to the aid.

Fox News reported: "The confusion over whether or not Mulvaney had admitted to a quid pro quo stemmed from an exchange with ABC News reporter Jon Karl. Karl asked if the investigation of Ukraine’s possible ties to Democrats during the 2016 election was connected to the withholding of the money, stating that this would be a quid pro quo.

"We do that all the time with foreign policy," Mulvaney said.

But then he contended there was no quid pro quo at all.

The impeachment inquiry was launched based on an anonymous complaint from a whistleblower who had second-hand information about the call.

Mulvaney said people should go back to the phone call if they have questions.