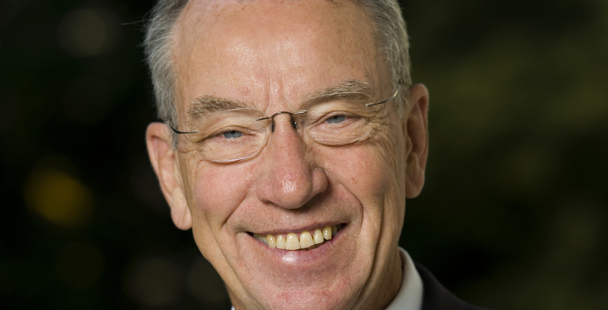 Republican Sens. Chuck Grassley, R-Iowa, and Ron Johnson, R-Wis., have written to the State Department expressing concern that the Ukrainian gas company Burisma Holdings appears to have used Hunter Biden's role on its board to influence State Department matters.

Democrats have launched an impeachment inquiry over President Trump's desire for Ukraine to investigate Hunter Biden's profiting from Burisma while his father was President Obama's point man for Ukraine policy. But Republicans have responded with their own inquiries into the Biden matter itself.

Grassley and Johnson said Wednesday that two recently obtained State Department emails indicate Burisma's consulting firm noted "two high profile U.S. citizens (including Hunter Biden as a board member) affiliated with the company" when requesting a meeting with State Department officials to discuss the validity of the U.S. government's classification of Burisma as corrupt.

Joe Biden is on video boasting he threatened Ukrainian officials with withholding $1 billion in U.S. aid if they did not fire Ukraine's top prosecutor, who was investigating Burisma at the time.

The anonymous whistleblower who's complaint triggered the Democrats' impeachment inquiry alleges President Trump threatened to withhold U.S. aid if Ukraine didn't investigate the Bidens. But the White House argues the transcript of Trump's July 25 conversation with the Ukrainian president refutes that claim. And Ukrainian officials said they didn't feel pressured, and they were unaware of any delay in aid.

The senators point out that a State Department email in 2016 said: "Per our conversation, Karen Tramontano of Blue Star Strategies requested a meeting to discuss with [Under Secretary] Novelli [U.S. Government] remarks alleging Burisma (Ukrainian energy company) of corruption. She noted that two high profile U.S. citizens are affiliated with the company (including Hunter Biden as a board member). Tramontano would like to talk with U/S Novelli about getting a better understanding of how the U.S. came to the determination that the company is corrupt. According to Tramontano, there is no evidence of corruption, has been no hearing or process, and evidence to the contrary has not been considered. Would appreciate any background you may be able to provide on this issue and suggested TPs for U/S Novelli’s meeting."

The senators say other documents "show other meetings that Burisma board members Hunter Biden and Devon Archer scheduled with high-ranking State Department officials. In May 2015, Hunter Biden asked to meet then-Deputy Secretary of State Antony Blinken to ‘get [his] advice on a couple of things’ and again for lunch on July 22, 2015. On March 2, 2016, just one day after Tramontano was scheduled to meet with Under Secretary Novelli about Burisma, Devon Archer was scheduled to meet with Secretary of State John Kerry."

At the time, the senators said, Joe Biden was the "public face of the administration’s handling of Ukraine."

They continued, "Emails recently obtained and made public through a FOIA request indicate that Burisma’s consulting firm used Hunter Biden’s role on Burisma’s board to gain access and potentially influence matters at the State Department."

The senators say they want to understand "what actions, if any, the Obama administration took to ensure that policy decisions relating to Ukraine and Burisma were not improperly influenced by the employment and financial interests of family members."