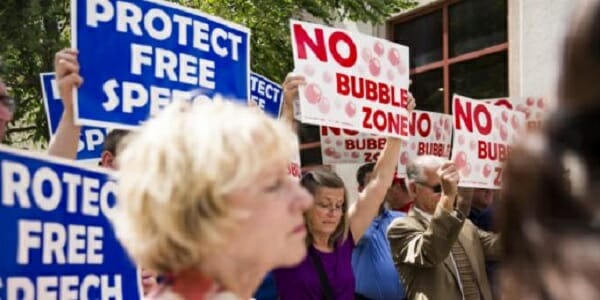 Liberty Counsel asked the court to reverse the denial of a preliminary injunction against a Harrisburg, Pennsylvania, ordinance that pushes pro-life counselors up to 70 feet away from the Planned Parenthood abortion facility, prohibiting their freedom of speech on the public sidewalk.

U.S. Supreme Court precedent was ignored in another case this month when, as WND reported, a federal judge in Maryland dismissed a lawsuit over the state's ban on counseling against same-sex inclinations.

In the Harrisburg case, the appeals court ignored the U.S. Supreme Court's decision in McCullen v. Coakley, Liberty Counsel said, "which requires the government to prove that it considered other alternatives prior to enacting a total ban of protected speech and to prove that its speech-restrictive ordinance is the least restrictive alternative."

"The city did nothing prior to adopting this buffer zone ordinance. The city never even attempted to enforce existing laws. Moreover, the court brushed aside the city's own interpretation of its ordinance to apply to one-on-one conversations 'of substance,' meaning the police officers apply the law only to pro-life speech," the organization said.

Liberty Counsel is representing Becky Biter and Colleen Reilly, who regularly  encourage women to protect the lives of their unborn babies.

In 2017, Liberty Counsel won an appeal of a prior ruling by Judge Sylvia Rambo. The court of appeals ruled Rambo ignored the First Amendment’s requirement that Harrisburg prove its ordinance did not unconstitutionally burden speech.

"The court sent the case back to the district court, ordering Judge Rambo to determine whether Harrisburg could satisfy its demanding burden. Following an evidentiary hearing where Liberty Counsel showed the court critical admissions of unconstitutionality by city officials, Judge Rambo upheld the ordinance again, leading to the current appeal," Liberty Counsel said.

Liberty Counsel said it would appeal the ruling immediately to the 4th U.S. Circuit Court of Appeals.

States have begun adopting such speech bans. One claimed it was "professional speech" as opposed to ordinary speech and wasn't protected by the First Amendment.

The Supreme Court, however, crushed that argument in the recent National Institute for Family and Life Advocates case, ruling there is no subcategory of speech that isn't protected.

Consequently, the justices ruled the state of California could not require pro-life crisis pregnancy centers to promote nearby abortionists.

However, Liberty Counsel explained: "Doyle counsels minors who voluntarily seek his help and are struggling with unwanted same-sex attractions, behaviors, and identity. Doyle’s counseling is provided solely through speech, but it is prohibited by Maryland’s counseling ban because the state disapproves Doyle’s viewpoint."

The Supreme Court's decision in National Institute for Family and Life Advocates "rejected the notion that states can single out the speech of licensed professionals for lesser protection under the First Amendment," Liberty Counsel said.

The judge chose to use as precedents two cases, Pickup v. Brown and King v. Governor of New Jersey, both of which were called out by the Supreme Court as mistakes.