The Category 5 storm packed winds of up to 185 mph and brought a storm surge that left 60 percent of Grand Bahama Island submerged. Patients were forced to evacuate from the city of Freeport's Rand Memorial Hospital in the wake of the hurricane, according to the Miami Herald.

The Red Cross estimated that more than 13,000 homes, almost half the number of the island of Grand Bahama and the Abaco Islands, were destroyed, CBS News reported.

At least 65 people lost their lives and 282 remain missing. The total financial cost of the damage done is approximately $7 billion.

Into this devastation stepped Samaritan's Purse, as it has done many many times since its founding in the 1970s.

One of the relief organization's primary missions was to set up its military-style field hospital to take the place of Rand Memorial in the short term until the facility could get on its feet.

“We have our own cargo airplane," Graham told The Western Journal. "We can move the field hospital on the plane, and we can be anywhere in the world within about 48 hours.”

Graham added that it takes an additional 24 hours to get the hospital set up.

Samaritan’s Purse is on the ground in the Bahamas and our team is seeing catastrophic destruction & widespread suffering.

Thanks to people like you, Samaritan’s Purse has been able to deploy staff, supplies & a Field Hospital to the Bahamas.

“All of our equipment is identical to the U.S. military’s," he said.

The United Nations' World Health Organization and the government of the Bahamas requested Samaritan's Purse deploy its field hospital after learning that Rand Memorial's electrical system was destroyed. The building was flooded with eight feet of salt water mixed with raw sewage.

Graham said the Samaritan's Purse field hospital is currently serving about 140 to 160 people each day. According to an organization news release, the hospital has served a total of over 5,200 patients since it was set up on Sept. 10.

The hospital is climate controlled, and medical staff is made of members of Samaritan's Purse Disaster Response Team, which consists of paid members and volunteers.

Many of the doctors and nurses come from emergency rooms throughout the United States.

A woman named Carla was one of the first patients treated, Samaritan's Purse said in its news release.

Carla had stepped on a nail, which led to her foot and toe becoming infected to the point that she needed not only antibiotics, but multiple surgeries.

When Carla arrived at the hospital, she was severely dehydrated, requiring an IV. She had been without food or water for two days after being trapped in her home during Dorian.

“The nurses and doctors are amazing," Carla said. "They prayed with me and comforted me. They encourage you in the Lord.”

Graham explained, "We want to do everything we do in the name of Jesus. That’s the name that we march under."

Samaritan's Purse's efforts are not limited to providing medical care.

Its DC-8 cargo plane has made 18 round trips carry supplies, and Samaritan's Purse has also hired barges to carry tons to supplies from the south Florida coast to the islands. 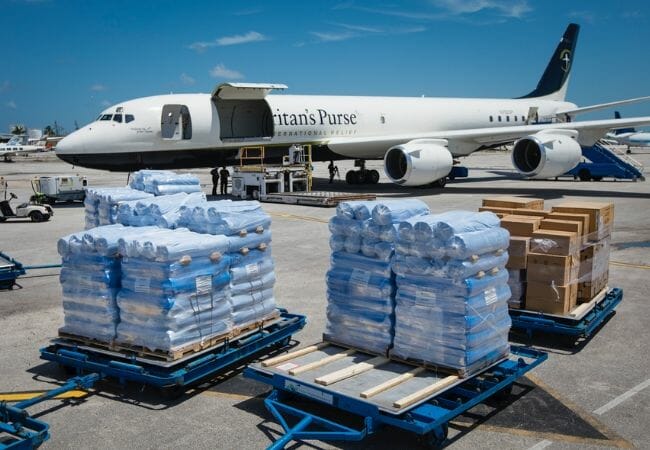 Samaritan's Purse derives its name from a parable Jesus Christ told about treating your neighbor as yourself.

The Samaritan in the story showed compassion for a man who had been beaten and robbed and left half-dead. After others, including religious leaders, passed the victim by on the side of the road, the Samaritan stopped and helped him, bandaging his wounds and then taking him to an inn and paying for him to stay there until the man recovered.

"I believe when people are down in a ditch along life’s road, whatever put them in that ditch -- it could be a tornado, or a hurricane, or a war -- that we should stop and we should try to help them and get them on their feet and get them going again," said Graham.

The humanitarian said that Samaritan's Purse is funded primarily by small donors digging into their own purses to help their neighbors, wherever they may be around the world.

Today is @Franklin_Graham's birthday! Join us in wishing the president of Samaritan's Purse a #HappyBirthday. pic.twitter.com/DZkMcYR9SZ

Samaritan's Purse recently received a grant from the U.S. government to help support its relief efforts in the Bahamas. Most of the money in the grant will go toward keeping the field hospital operational.

Originally, Graham was expecting the facility to be open for three months, but it may now have to stay in place for up to six while Rand Memorial is restored.

“We’ll be working down there for some time,” he said.

Graham has found God to be faithful in supplying the resources Samaritan's Purse needs to fulfill its calling.

“God has blessed us over the years," the Christian leader said. "We've been able to respond to war areas and areas of storm and famine, crisis areas around the world. We're able to respond and help people."

Correction: An earlier version of this article included an incorrect name for the city of Freeport.

Randy DeSoto, The Western Journal
Gymnast who famously won gold for U.S. on injured ankle speaks out on Simone Biles
'Jeopardy!' contestant sets record for all the wrong reasons
Police discover an entire Texas hotel has been rented out for COVID-positive immigrants
Gavin Newsom pulls his kids out of summer camp for stupid reason
Biden's DOJ sends states a warning about election audits: 'We will be following this closely'
See more...