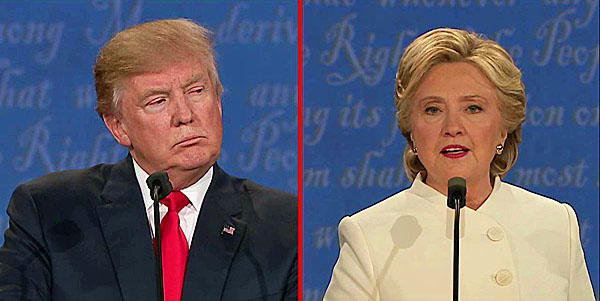 In an era when simply wearing a MAGA hat supporting Donald Trump in public routinely results in the wearer being spit on, physically attacked or – in the case of the Covington Catholic schoolboys – having their lives turned upside down, can a supposedly "scientific" poll gauging support for Trump be reliable?

However, on election day in 2016, a Fox News poll had Clinton ahead of Trump by 4 percentage points.

This time, Clinton is not among the declared candidates, but she has hinted in recent weeks that she might give a run for the White House a third try.

Last month, in an interview with PBS "News Hour," she said it's "remarkable how obsessed [Trump] remains with me."

"Maybe there does need to be a rematch," Clinton said.

"Obviously, I can beat him again," she said, apparently referring to the irrelevant national vote count. "But, just seriously, I don’t understand, I don’t think anybody understands what motivates him other than personal grievance, other than seeking adulation."

Are you better off four years later?

The models show Trump getting at least 289 electoral votes and as many as 351, assuming average turnout, CNBC reported in October.

The Moody's models have been tested on each president election back to 1980 and were correct each time, with the exception of 2016, when they indicated a narrow Clinton victory.

The models are based on how consumers feel about their personal financial situation, how well the stock markets have performed and the prospects for unemployment, which has fallen to a 50-year low.

Moody's concludes that if those variable hold up, the president likely will be elected to another four-year term.

But what about the impact of the Democrats' impeachment proceedings, with a Fox News poll indicating 49 percent of voters favor impeaching Trump and removing him from office?

Trump, speaking to reporters on the White House lawn, pushed back on the polls.

"You're looking at the wrong polls. I have the real polls. The CNN polls are fake. The Fox polls have always been lousy. I tell them they ought to get themselves a new pollster," he said.

Most of the polls have asked, "Do you support or oppose impeaching Trump?" But a poll by Suffolk University for USA Today that gave respondents three options found just 36 percent say the House should vote to impeach.

Further, Trump said in an interview last Thursday with the Washington Examiner that the Democratic impeachment inquiry has "energized my base like I've never seen before" and predicted it will "backfire" on Democrats.

He called the impeachment proceedings a personal insult.

"I think [impeachment is] a very dirty word, it’s a word that I can’t believe that the do-nothing Democrats are trying to pin on me, and it’s a disgrace. And I think it’s going to backfire on them,” he said from behind the Resolute Desk in the Oval Office.

"I did nothing wrong, and for them to do this is a disgrace," he said. "To me, the word impeachment's a very ugly word."