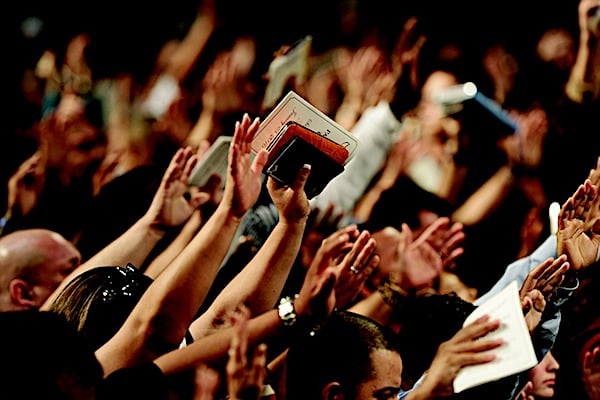 When President Trump stunned pollsters and the Washington establishment by defeating Hillary Clinton's massive political superstructure in the race for the Oval Office in 2016, he was helped by evangelical Christians.

Drawn by his promise to oppose abortion, restore religious rights lost under Barack Obama's administration and more, they flocked to his campaign.

But many believe there was another factor in play: the prayers of those evangelicals.

Evangelist Franklin Graham, CEO of the worldwide Christian ministry Samaritan's Purse, had held a series of prayer rallies at state capitols across the nation. While the events were not political, they raised the profile of faith issues in the race. And after Trump's victory, Graham said prayer "and God's answer to it," helped the Trump-Pence team win, reported the Washington Post at the time.

"I could sense going across the country that God was going to do something this year," Graham said in 2016. "And I believe that at this election, God showed up."

He wrote on Facebook at the time: "Did God show up? In watching the news after the election, the secular media kept asking 'How did this happen?' 'What went wrong?' 'How did we miss this?' Some are in shock. Political pundits are stunned. Many thought the Trump/Pence ticket didn't have a chance. None of them understand the God-factor."

On Twitter, he wrote: "As Christians, as those who follow and trust in the Lord Jesus Christ, let us pray throughout the day and all of these proceedings. Pray for our nation, pray for our leaders, and pray for @POTUS @realDonaldTrump."

And on Facebook he said: "It's a day of shame for America. The media is calling the Democratic-led impeachment inquiry 'historic;' and it is—historically shameful. That our politicians would bring this kind of harm to our country over a phone call, with the world watching, is unbelievable. As Christians, as those who follow and trust in the Lord Jesus Christ, let us pray throughout all of these proceedings. Pray for our nation, pray for our leaders, and pray for President Donald J. Trump."

Evangelical voters are expected to play a decisive role again in 2020, and Trump's support appears mostly solid as he's worked to defund Planned Parenthood, reduce federal tax support for abortion overseas, protect the rights of Christians in business to live by their faith and appoint federal judges who adhere to the Constitution.

The Gospel Coalition is advising Christians on how to prepare for 2020, what beliefs candidates hold and more.

"That's the most they have voted for a Republican presidential candidate since 2004, when they overwhelmingly chose President George W. Bush by a margin of 78-21 percent."

At that time, high-profile leaders such as Pat Robertson, Tony Perkins and Ralph Reed stood by Trump.

Perkins said in 2016, "Donald Trump’s victory provides a much needed opportunity to get America back on track again."

Graham recounted what happened in 2016: "Prayer groups were started. Families prayed. Churches prayed. Then Christians went to the polls, and God showed up. While the media scratches their heads and tries to understand how this happened, I believe that God’s hand intervened Tuesday night to stop the godless, atheistic progressive agenda from taking control of our country."

But her requests for prayer have been linked to criticism.

For instance, she said she wanted people to pray for the president when a meeting about infrastructure plans collapsed and she charged the president "really couldn’t ... match the greatness of the challenge that we have."

She also said the nation should pray for the president just after she accused him of having a "meltdown" in a White House meeting.

She said the president had difficulty "handling the truth."

Additionally, she said she was praying for the president just after announcing a formal impeachment investigation of the president.

She asked God to help Trump see "right from wrong."