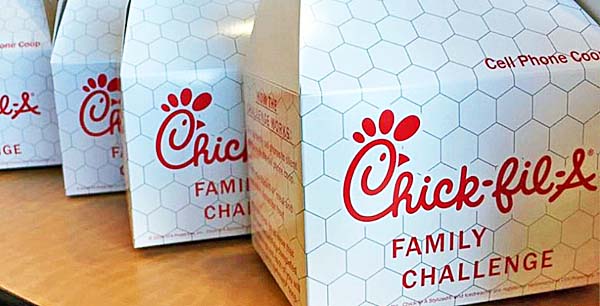 Amid criticism of Chick-fil-A from many supporters of traditional marriage, evangelist Franklin Graham said Thursday he personally received assurances from CEO Dan Cathy that the company's decision to no longer support the Salvation Army and the Fellowship of Christian Athletes was not a response to LGBT activism.

"Has Chick-fil-A caved? Some are saying they’ve rolled over, that they’ve conceded to the LGBTQ protests because they released a statement about their charitable giving. They announced that in 2020 they’re giving to fight hunger and homelessness and support education. What’s wrong with that?" Graham wrote on Facebook.

Graham said that after hearing reports Monday that the company will no longer support the two Christian organizations and will focus on the issues of education, homelessness and hunger, he got on the phone with Cathy.

"Dan was very clear that they have not bowed down to anyone’s demands, including the LGBTQ community," Graham wrote. "They will continue to support whoever they want to support. They haven’t changed who they are or what they believe. Chick-fil-A remains committed to Christian values. Dan Cathy assured me that this isn’t going to change. I hope all those who jumped to the wrong conclusion about them read this."

Among the critics is Jennifer Roback Morse of the pro-family Ruth Institute, who asked, "How long will it be before Chick-fil-A is delivering sandwiches to gay pride parades?"

Graham said "the gay movement wouldn’t ever be happy with Chick-fil-A unless they were open on Sunday, gave all of their charitable donations to LGBTQ organizations, and flew the rainbow flag over their stores!"

"Their hatred for Chick-fil-A is rooted in founder Truett Cathy’s strong stand for biblical 'traditional' values and his desire to honor God," he said.

"No fast food chain does a better job. I went through the drive-thru at Chick-fil-A yesterday morning, and I thought I might get dinner there—but a whole lot of other people had the same idea! A Chick-fil-A sandwich with waffle fries sounds really good right now!" Graham wrote.

The company said in an announcement Monday it no longer was making "multiyear commitments" to organizations but did not single out FCA or the Salvation Army.

It said it would evaluate its donations annually and future recipients could "include faith-based and non-faith-based charities."

The fact-check site Snopes said the impact of the new donation strategy is unclear.

It said "several dozen other groups – with no anti-LGBT record – would not receive funding in 2020 either, and so the strategy does not appear to have been targeted specifically at the Salvation Army and the Fellowship of Christian Athletes."

"Further, Chick-fil-A has repeatedly declined to specify that the cut to the controversial groups' funding was linked to their LGBT-rights records, and a company spokesperson would not rule out the possibility that the groups could receive funding again in the future."

Gay activists groups apparently assumed the move was a response to their criticism, with GLAAD saying "Chick-Fil-A investors, employees, and customers can greet today’s announcement with cautious optimism, but should remember that similar press statements were previously proven to be empty."

The Salvation Army said it was "saddened" by the decision, arguing it serves more than 23 million individuals a year and is "the largest provider of poverty relief to the LGBTQ+ population."

The company found itself in the bull's-eye of LGBT campaigners in 2012 when Dan Cathy, then the chief operating officer, expressed opposition to same-sex marriage in an interview.

Company sales soared 12 percent, to $4.6 billion, in 2012. And this year Chick-fil-A became the third largest restaurant chain in America, after McDonald's and Starbucks.