Although most Americans imagine "climate change" has to do with a scientific and political debate over global climate trends and the role of human-caused carbon dioxide emissions, the reality is very different.

Climate change and particularly its "solutions" championed by the Democratic Party actually are the far left's secret weapon – its atomic bomb – for destroying capitalism and America's existing social, moral and economic order and replacing it with an entirely new socialist, globalist order. It is the real ongoing coup d'etat – the attempted overthrow not just of President Donald Trump, but of America. 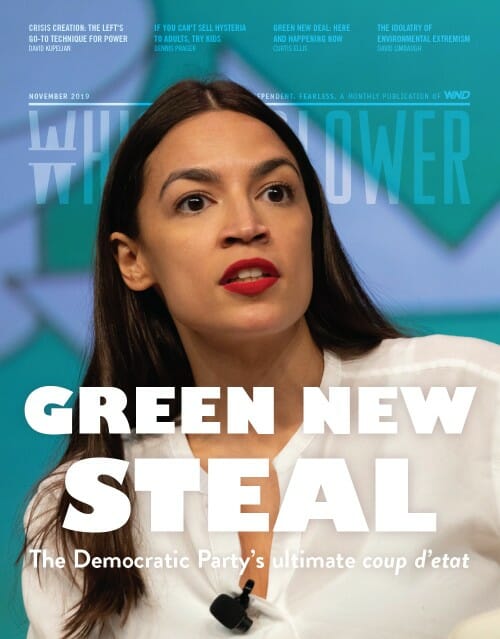 (Editor's note: Due to circumstances beyond our control, we are skipping the October issue of Whistleblower. However, all subscribers will still receive a full 12 issues in their subscription, so the change is simply an adjustment to the way Whistleblower issues are dated to bring them more in line with their actual release date. Thank-you for your understanding.)

Right now, millions of American school children are terrified, anxious and depressed as a result of being indoctrinated via sensational "news stories" quoting politicians and "experts" who insist human-caused global warming will soon lead to the end of life on earth as we know it.

Little do those kids know that America's most prestigious news organizations have been utterly obsessed with tales of catastrophic climate change for well over 100 years.

Starting way back in 1895 – when Grover Cleveland was president, the sport of volleyball had just been created and "America the Beautiful" was first published – the New York Times announced the coming of a new ice age. That's right. Americans were in danger of freezing to death.

Since then, major U.S. journalism outlets have been swept up into four different eras of near hysteria over supposedly imminent climate crises – from global cooling to global warming, to global cooling again to global warming again – each dire prediction featuring "scientists" and "climate experts" authoritatively warning that seas will rise, entire nations will be wiped out and "billions will die."

With the repeated wild swings between predictions that the earth will burn up and freeze over, no wonder the "global warming" label has more recently given way to the more flexible, all-purpose phrase, "climate change."

Meanwhile, top Democrats are today warning voters that if America doesn't immediately adopt their multi-trillion-dollar "Green New Deal," the earth will be uninhabitable in 12 years.

What if the Green New Deal, introduced to Americans by Rep. Alexandria Ocasio-Cortez, and touted by the elite media and virtually all Democratic presidential candidates, is not really about remedying the supposedly catastrophic effects of climate change? What if it's all just a ploy, a Trojan horse designed to bring about a full-scale socialist revolution in America?

It turns out, that's exactly what Ocasio-Cortez' own former chief of staff, Saikat Chakrabarti – widely acknowledged as the brains behind the socialist New York congresswoman – recently revealed. In a story reported by the Washington Post, Chakrabarti stunningly admitted: "The interesting thing about the Green New Deal is it wasn't originally a climate thing at all. Do you guys think of it as a climate thing?" asked Chakrabarti. "Because we really think of it as a how-do-you-change-the-entire-economy thing."

Whistleblower Editor David Kupelian sums it up this way: "We are beholding one of the greatest hoaxes in world history."

Highlights of "GREEN NEW STEAL" include:

"Make no mistake," says Kupelian. "While it may be tempting to dismiss people like Alexandria Ocasio-Cortez, whose arrogance is exceeded only by her ignorance, just beyond her is the entire elite globalist left, which for decades has been dreaming and scheming about implementing their precious socialist new world order. And they think now is finally their time.

"But first," adds Kupelian, "they have to get rid of the great disrupter of their plans, President Donald J. Trump." 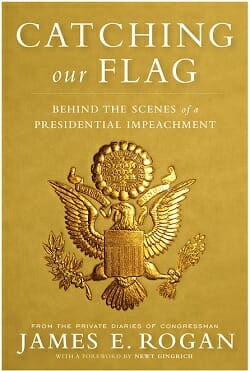 You'll get the sensational and important 488-page book, "Catching Our Flag: Behind the Scenes of a Presidential Impeachment" (hardcover) by former U.S. Congressman and current Superior Court Judge James E. Rogan. "Catching Our Flag" is highly relevant to understanding today's attempted impeachment of President Donald Trump, and reveals the startling hypocrisy and perversity of congressional Democrats' efforts.

Indeed, Newt Gingrich recently appeared on Fox News' "Hannity" show to talk about how today's impeachment circus is being handled in precisely "the opposite" way impeachment was handled when House Republicans investigated Bill Clinton in 1998. At that time, Gingrich was House Speaker and Rep. Jim Rogan was a freshman member of the House Judiciary Committee chosen to help lead the prosecution. As Gingrich told Hannity, anybody "who really wants to see the truth" about how fair and bipartisan was the Clinton impeachment, compared to the wildly irresponsible, dishonest and utterly partisan impeachment "inquiry" of Donald Trump, can read the detailed, documented account Rogan wrote in "Catching Our Flag," published by WND Books.

Gingrich, who wrote the book's "Foreword," explained to Hannity's audience that the Clinton impeachment proceedings "were so bipartisan" that he held a joint press conference with Democratic House Minority Leader Dick Gephardt to announce they were going to print the entire Starr report so the American people could see it. No secret tribunals. No kangaroo courts. No mysterious, unnamed "whistleblowers."

"It's the opposite of the way that Speaker Pelosi has done this," the former House Speaker said, emphasizing that the House under his leadership was "forced to act" to impeach Clinton because of "a report from independent counsel Ken Starr that says Bill Clinton is guilty on 11 counts."

From his first day on the House Judiciary Committee, Rogan knew if the Lewinsky scandal ever led to impeachment proceedings, future accounts would suffer from faulty memories or faulty motives. To combat the threat of factual or historical error, Rogan kept copious notes during every significant meeting relating to impeachment from his first day on the committee. He did this so there would be a complete and accurate historical chronicle – the best evidence – of what really happened behind the scenes in the unfolding drama. This historically important archive is unmatched in its thoroughness and integrity. And it provides a stark contrast with today's impeachment mania.

If you prefer, you may order a single copy of the November 2019 issue, "GREEN NEW STEAL." Or GET THE DIGITAL VERSION HERE!