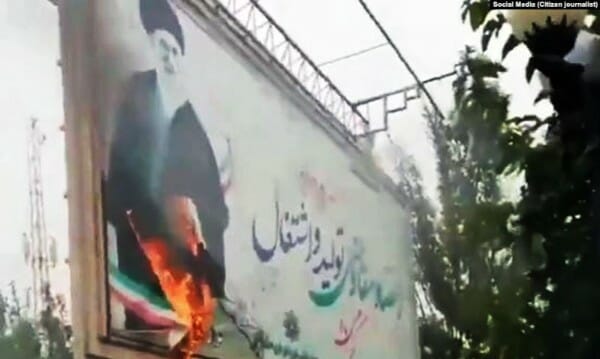 Iranian authorities have almost entirely cut off access to the internet in an effort to stem nationwide demonstrations said by some activists to be the most expansive since the 2009 uprising.

At least 40 people have been killed, based on reports from citizens and rights groups, according to Radio Farda, the Iranian branch of the U.S. government-funded Radio Free Europe/Radio Liberty external broadcast service.

Noting the criticism of Obama for not supporting the protesters in 2009, Ivar Farhadi, who describes himself as an "anti-Islamic Republic activist," said on Twitter the "scale of the protests in Iran is wider than 2009, yet no support from US."

"The Obama administration also issued a statement expressing concern but no action," he wrote.

Secretary of State Mike Pompeo tweeted that "the United States is with you." And on Sunday, the White House condemned the mullah-led regime's use of "lethal force and severe communications restrictions," criticizing a government that "abandons its people and embarks on a crusade for personal power and riches."

The protests were sparked Friday by the government's announcement of a hike in fuel prices by as much as 300%.

Videos on social media before the internet shutdown showed banks, gas stations and government buildings on fire and protesters chanting "down with Khamenei," referring to Supreme Leader Ayatollah Ali Khamenei.

The Trump administration has been issuing sanctions since May 2017, when it pulled out of the nuclear agreement. The sanctions have severely harmed Iran's economy, causing its currency to plummet, prices to spike and shortages of food and medical equipment.

In 2009, a rigged election in favor of incumbent Mahmoud Ahmadinejad sent millions of Iranians into the streets in defiance of authorities in what became known as the Iranian Green Movement. Dubbed the "Twitter Revolution," for its reliance on social media, it eventually was quelled through arrests, beatings and torture.

Khamenei has blamed the current riots on foreign influences.

"The counter-revolution and Iran's enemies have always supported sabotage and breaches of security and continue to do so," Khamenei said Sunday in a speech on state television. "Unfortunately, some problems were caused, a number of people lost their lives and some centers were destroyed."

Iranian journalist and activist Masih Alinejad, who says there have been more than 100 deaths and more than 1,000 arrests related to the current protests, is calling, via Twitter, on the European Union and the United Nations to monitor human rights violations.

After more than 100 deaths and more than 1000 arrests in #IranProtests, I call on the EU and UN to monitor human rights violations in Iran. And I call on Twitter, Instagram, Facebook to ban Islamic Republic officials until Internet access is restored.#TweeterBanKhamenei pic.twitter.com/n5tC5pgzco