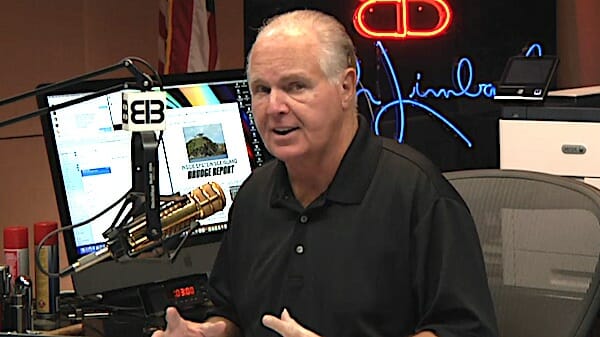 With recent polls showing support for impeachment plunging, will Democrats abandon their march toward trying to oust President Donald Trump from office?

Talk-radio host Rush Limbaugh is offering House Speaker Nancy Pelosi a possible way of escape when it comes to holding a formal impeachment vote for the commander in chief.

"She could go on TV, call a press conference and tell a bunch of lies about how successful the hearings were," Limbaugh explained Monday on his national broadcast. "That we’ve got all of this evidence of bribery and extortion and praise to the hilt all of the civil servant left-wing liberal Democrat witnesses, extol their virtues to no end, praise them to the hilt, praise them by name."

"And then say that even if she were to get every Democrat in the House voting, the problem is that the process then goes to the Senate where the corrupt Republicans are in charge, where the Republican Party is going to not listen. This is Pelosi speaking, I’m making up the words, but this would be her message. The Republican Party will openly defy the wishes and will of the American people as represented in the vote to impeach in the House of Representatives."

And in the trial, the Republicans will be able to call witnesses who will be able to distort and confuse and get away with it because the partisan Republicans who will do anything to protect Trump will be running the trial. And she can continue to set it up as whatever happens in the Senate will be illegitimate because of Republican partisanship, and then present that as the greatest problem facing America. Republican partisanship, Republican defense of Donald Trump. The Republicans’ refusal to stand up for the Constitution.

I mean, just ladle it on the Republicans and don’t stop. And then tell her wacko, crazed base a truth, that the inherent problem of going to the Senate is that because of the partisanship of the evil Republicans, this president, who we have proven has violated his oath of office will be acquitted because of Republican partisanship, because Republicans will ignore the evidence just like they did with Kavanaugh. They will see to it that this president is protected.

And then she says, ladies and gentlemen, the last thing we want, the last thing this country needs, the last thing this country can put up with and tolerate is this president being acquitted. That would be an outrage to the Constitution. That would be an outrage to the American people. I simply will not participate in a process that ends with this president, who is as guilty as any president has ever been, I will not be part of a process that finds him not guilty. I simply cannot do that to America.

And because of the partisan Republicans, because of the mean-spirited Republicans, because of racist, bigoted, sexist homophobic Republicans — just really ladle it on — this president will be found not guilty, and that is something our country cannot withstand. And I, your speaker, will not put this country through that. Even on the day, she could say, even on those days where we care about God, God knows the president is guilty. But the Republicans who also know he’s guilty will do everything they can to shield and protect him because he has corrupted them like he has our great country.

Limbaugh also noted Pelosi could complain about Senate rules precluding some of the Democrat senators running for president from being able to campaign during any Senate trial of Trump. Again, pretending to be Pelosi, Limbaugh said:

But would Democrats across America accept such a potential move by Pelosi?

"That’s a tough call," said Limbaugh. "'Cause her wacko base, they want Trump in jail. They want him shot at dawn. They want the absolute worst that they could imagine happening. So Pelosi’s chore, if there’s anything to this, backing off on it, polling data showing less and less support, she doesn’t have enough votes."

Though Limbaugh said he wasn't making a prediction, he concluded Pelosi would probably not stop the impeachment train in its tracks.

"My instinct is that she can’t. She can’t not follow through with this. She’s got to have the vote, after everything they’ve said about this. And Schiff continues to bleed all over everybody on TV about he’s got the goods," he said.

"My point is she’s got some avenues she could go down if there is anything to this not having a vote. And if she doesn’t have a vote, then Schiff, you know, they might have to drag him off a ledge somewhere if there isn’t a vote."