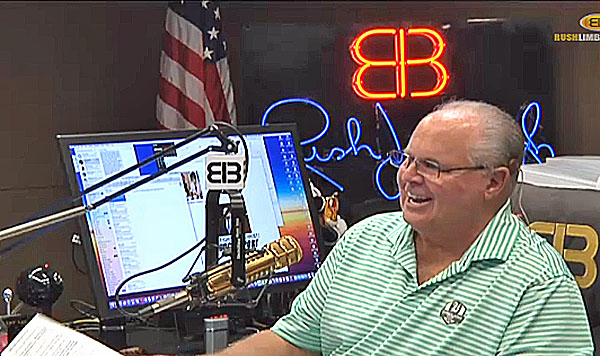 "Pelosi, are you getting close to making a decision on shutting this down?" Limbaugh asked.

Schiff insisted for more than two years he had proof of President Trump "colluding" with Russia to win the 2016 election before special counsel Robert Mueller concluded there was no evidence to support the claim.

Limbaugh, on his show Wednesday, noted Rep. John Ratcliffe, R-Ill., asked the witnesses: "Could either of you two guys identify the impeachable offense?"

There was dead silence.

Limbaugh said there was a "kerfuffle" as Schiff tried to "prevent damage," then Schiff noticed Ambassador William Taylor wanted to answer.

But instead of helping the Democrats, Taylor said: "I want to remind everybody here, I’m not here dealing with impeachment. I’m not here to deal with partisan things. I’m not here, I have no interest in the outcome."

Limbaugh commented: "You could have heard the lead balloon drop on the chairman’s chair."

He also pointed out Taylor admitted his knowledge was second-hand, and the other witness, George Kent, a senior State Department official, claimed his expertise was in anti-corruption and rule-of-law issues.

Limbaugh pointed to Schiff's previous lies about the impeachment evidence.

"Trump did not do what Schiff wants you to think he did. Schiff knows Trump didn’t say those things. Schiff is making it up and he’s lying. It’s psychopathic. But it’s also classically political. He’s making it up and hoping, then, to build a case the American people will believe on the lie," he said.

Limbaugh said the two witnesses on Wednesday were there for "a sponsored mutiny."

He said the testimony suggested Trump didn't do his foreign policy they way they thought it should be handled.

"They’re essentially suggesting that the president has engaged in misconduct for not using them. And these hearings are designed for them to provide evidence of Trump’s incompetence. Not impeachable offense, but incompetence or misconduct or whatever."

He said, however, American voters will decide, and the bureaucratic insiders "don't get to decide to throw the president out of office if their foreign policy is not used and if they are not used."

The bottom line, he said, is there "hasn’t been an impeachable offense mentioned."

"But their opinions do not constitute crimes. If they disagree with the president doesn’t mean he’s committed a crime. But in their world, it does, folks. This is the point. In their world, any deviation from their channel is considered to be un-American or irregular or so out of the norm as to be intolerable."

He added, "And it really is no more complicated than that."