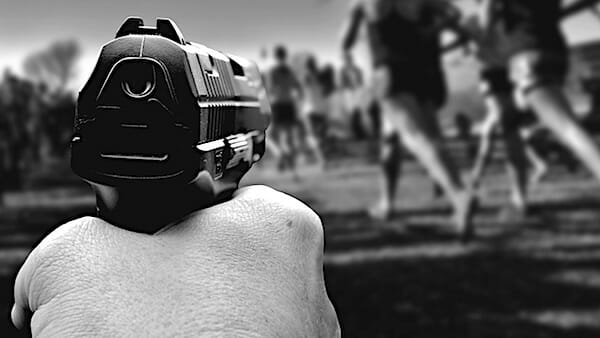 A woman whose six children all became terrorists – the five still alive have accumulated a total of 19 life sentences – is being praised and honored by Palestinian officials.

"There is no doubt Palestinian Authority leaders value terrorists and murderers, and go to great lengths to show their support for them: The PA pays them generous salaries while in Israeli prison and after, ensures them jobs upon their release, and even rebuilds their houses free of charge when Israel demolishes them as a deterrent to discourage others from attacking Israelis," the PMW said.

"The most recent show of this infinite endorsement has come from the very top of the PA – from the prime minister himself – to Um Nasser Abu Hmeid who is the mother of six terrorists responsible for at least 10 murder," the report said.

PMW explains the background: "Six of the Abu Hmeid brothers were involved in terror attacks in which 10 people were murdered. Four are serving multiple life sentences; one is serving a single life sentence; the sixth was killed during an attempted arrest by Israel."

"Under Palestinian Authority law, the PA pays the Abu Hmeid brothers and thousands of other terrorists monthly salaries from the day of their arrest. For the 'martyred' brother, the family receives a monthly allowance for life. The PA is paying the Abu Hmeid family every month: $10,799. Total PA payments to the Abu Hmeid family through September 2019: $1,110,498."

The payments are in addition to rebuilding the family's home, which was demolished under Israeli law for the family's terrorism.

"In May 2018, Islam Abu Hmeid threw a marble block from the roof of the Abu Hmeid family house, murdering Israeli staff sergeant Ronen Lyubarsky. In response, as part of its deterrent policy, Israel demolished the family's house. Immediately afterwards, the PA committed itself to rebuilding it. Despite the financial crisis the PA was in, work on the construction progressed and just a few weeks ago, Palestinian media announced that the new structure was taking form. Enforcing the original decision, Israel destroyed the structure being built," PMW reported.

PA officials then promised another rebuild.

The Palestinian prime minister visited the mother to praise her as a "school for patience" and explain how society could "learn from her."

The prime minister said: "I convey to you the blessings of [PA] President Mahmoud Abbas, and emphasize to you that we will remain loyal to our commitments to our prisoners and martyrs and their families, and this is at the heart of our priorities and concerns and we will build what the occupation destroyed.' He added: 'Um Nasser is a school for patience and we learn perseverance and resolve from her, and Allah willing the day will come when we will visit you in your home in Jerusalem."

Shtayyeh also honored the mother at a ceremony on Palestinian "National Women's Day," the report said.

Ramallah Gov. Laila Ghannam said the mother is "a symbol for Palestinian women."

She stated: "The women of Ramallah and of the homeland are the mothers of the martyrs; the mothers of the prisoners – 'the living Martyrs'; the female prisoners – the women of all of us; the female martyrs... We will begin with a blessing for the woman who stood before the ruins of her house five times when it was demolished – Um Yusuf Abu Hmeid... and she is the mother of [Islam] Yusuf Abu Hmeid (i.e., terrorist, murdered 1) and the mother of all the young people to whom we send all the blessings. She is truly a symbol for Palestinian women who have struggled and shown that our will is stronger than this occupation."