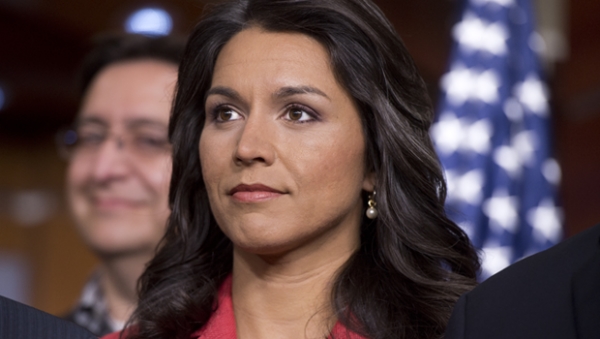 The Huffington Post reports she "hinted at a conspiracy at the highest levels of the U.S. government to stop the public from fully knowing the role that longtime U.S. partner Saudi Arabia played in the attacks."

Gabbard's email began: "We deserve all the information on 9/11."

It features a video and a petition asking President Trump to declassify "all information related to 9/11."

She contends American people still don’t have access to the truth about Saudi Arabia and who helped al-Qaida carry out the attacks.

"It is absolutely unacceptable that our government’s investigation into Saudi ties has been kept from these 9/11 families and from the American people," the email says.

It's unclear what she wants declassified.

The original 9/11 report from the George W. Bush administration left one section classified, but that section was released mostly during 2016.

Said the Huffington Post: "Obama’s White House press secretary at the time, Josh Earnest, emphasized that the U.S. did not believe the Saudi government supported al Qaeda, which waged a bloody campaign against Saudi authorities in the years after 9/11. Lawmakers from both parties ― including key House Intelligence Committee members Adam Schiff (D-Calif.) and Devin Nunes (R-Calif.) ― agreed."

The Huffington Post said: "Later reports, including that of the 9/11 Commission, explicitly cleared the Saudi government in the 2001 terror attacks. Still, allegations of Saudi culpability continued, and in 2016, Congress passed a bill by overwhelming bipartisan majorities allowing the families of 9/11 victims to sue the kingdom ― showing that despite the Saudis’ lobbying influence and the U.S. government’s fears of losing an ally, U.S. lawmakers aren’t perpetually beholden to them."

The Post noted there is no current investigation, secret or otherwise, into Saudi links to 9/11.

"For an American with Gabbard’s prominence to speak in this darkly paranoid way is a boon for leaders like Assad and Russian President Vladimir Putin," the Post said. "It bolsters their strategy of pointing to American failings, real or imagined, to distract from their own abuses and of trying to undermine public faith in the U.S. political system to delegitimize democracy and shore up their own tyrannical rule.

"Coming from a Democrat, it’s also political gold for Trump, a way to say there’s bipartisan approval for his assertions that he is unfairly victimized by members of a so-called 'deep state,' largely in the U.S. foreign policy apparatus. Trump tapped frustration with America’s national security track record in his 2016 contests with traditional Republicans and former Secretary of State Hillary Clinton ― and he’s supported Gabbard as she has recently sparred with Clinton and promoted herself as the way for Democrats to break with what she calls 'the Bush-Clinton doctrine.'"