Auburn Police said in a news release Monday morning that they have found human remains in a wooded area in Macon County, Alabama, which they believe are Aniah Blanchard's. 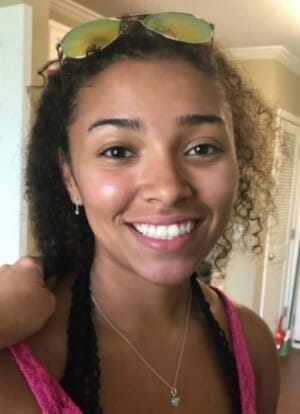 Aniah Blanchard, 19, was reported missing on Oct. 24, 2019. Nearly a month after her disappearance, authorities released that they have found humans remains they believe belong to Blanchard. (Auburn Police Department)

"During the course of the ongoing investigation into the disappearance of Aniah Blanchard, investigators obtained information regarding the possible location of a body," Auburn Police said in a statement released Monday. "After a brief search by Investigators they located what appeared to be human remains several feet into the woodline.

"A complete investigation is underway by ALEA and Auburn Police to determine the identity and how the victim came to be at that location. The examination will explore if the remains are those of Aniah Blanchard."

Blanchard was a student at Southern Union State Community College in Wadley, Alabama, which is north of both Auburn and Montgomery.

The sobering news comes nearly a month after she was last seen by a family member on the night of Oct. 23, 2019, however, she wasn't reported missing until the following day.

A surveillance video from a gas station in Auburn, Alabama, showed Blanchard in the store on Oct. 23. One of the suspects in the case, Ibraheem Yazeed was also there at the same time.

Investigators discovered the teen's car at an apartment complex in Montgomery, Alabama, where they found blood evidence "indicative of someone suffering a life-threatening injury" in the passenger side seat, according to AL.com.

The vehicle also had damage to the right front fender and passenger’s side door.

UFC fighter Walt Harris, who was extremely involved in the efforts to find his stepdaughter, has not yet commented on the devastating news.

If you have any information that could help investigators with this case, please contact the Auburn Police Division Detective Section at 334-501-3140, Central Alabama Crime Stoppers at 334-215-STOP, or the 24-hour non-emergency number at 334-501-3100.