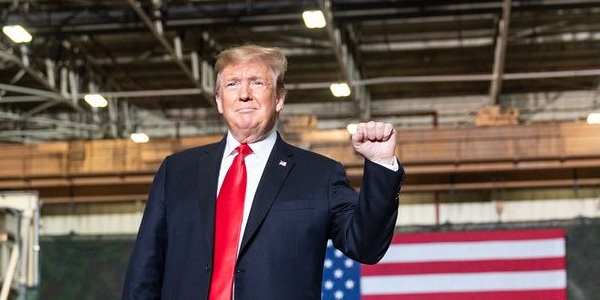 Major polls have indicated President Trump's approval rating is low, half of Americans want him impeached and he is trailing Democratic Party candidates nationally in hypothetical one-on-one matchups.

But with no reason to believe the "hidden Trump vote" that factored into the surprising 2016 victory has gone away, could a Politico poll released Wednesday be more indicative of what might happen one year from now?

Registered voters, in this instance, weren't asked who they would vote for. Instead the pollster wanted to know who they think will win.

Less than a week after the Democrats launched their formal impeachment inquiry, 56% of voters, including 35% of Democrats, believe the president will be re-elected next November.

The Politico/Morning Consult poll found 85% of Republicans and 51% of independent voters believe Trump will win another four years in the White House.

Conducted Nov. 1-3, the survey of 1,983 registered voters also found only 41% of voters approve of the job Trump is doing, with 55% disapproving.

The models show Trump getting at least 289 electoral votes and as many as 351, assuming average turnout, CNBC reported in October.

The Moody's models have been tested on each president election back to 1980 and were correct each time, with the exception of 2016, when they indicated a narrow Clinton victory.

The models are based on how consumers feel about their personal financial situation, how well the stock markets have performed and the prospects for unemployment, which has fallen to a 50-year low.

Moody's concludes that if those variable hold up, the president likely will be elected to another four-year term.

But what about the impact of the Democrats' impeachment proceedings, with a Fox News poll indicating 49 percent of voters favor impeaching Trump and removing him from office?

Most of the polls have asked, "Do you support or oppose impeaching Trump?" But a poll by Suffolk University for USA Today that gave respondents three options found just 36 percent say the House should vote to impeach.

Further, Trump said in an interview last Thursday with the Washington Examiner that the Democratic impeachment inquiry has "energized my base like I've never seen before" and predicted it will "backfire" on Democrats.

He called the impeachment proceedings a personal insult.

"I think [impeachment is] a very dirty word, it’s a word that I can’t believe that the do-nothing Democrats are trying to pin on me, and it’s a disgrace. And I think it’s going to backfire on them,” he said from behind the Resolute Desk in the Oval Office.

"I did nothing wrong, and for them to do this is a disgrace," he said. "To me, the word impeachment's a very ugly word."