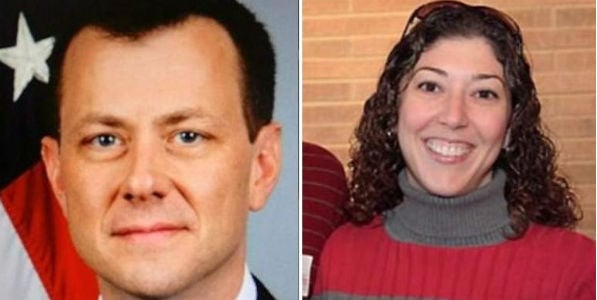 A new report reveals that it was removed FBI agent Peter Strzok's wife who outed his affair with fellow FBI worker Lisa Page.

You'll recall they are at the center of a lot of controversies in Washington, mostly related to the agency's questionable investigations of the Trump campaign in 2016.

They pointedly exchanged text messages during that campaign assuring each other how President Trump would not win and if so, they had an "insurance" policy.

There still are a lot of answers to be had regarding their actions.

But one answer now has been revealed: how Strzok's clandestine affair with Page was outed.

It was his wife.

Gather round and listen how Chief of Counterespionage was compromised by his own wife who (after confronting "hat-trick" Lisa) turned over incriminating tryst evidence to FBI which would then end up as public spectacle & exculpatory diggs for Flynn. pic.twitter.com/6RpIfGwRP5

An OANN.com report said, "Now we learn it was because of Peter Strzok's own wife was able to get to his phone, get the calls to Lisa Page, confronted her, and went to the FBI with the whole thing."

The Gateway Pundit said, pointedly, "HUGE: Strzok-Page texts were not unearthed by sharp FBI investigative work – Strzok's angry and scorned wife turned him in after finding texts on his phone."

The report included a social media statement from Stephen McIntyre that, "turns out that combined resources of Mueller investigation and FBI did not identify the problematic Strzok-Page texts. It had the most old-fashioned explanation of all: Strzok's wife."

turns out that combined resources of Mueller investigation and FBI did not identify the problematic Strzok-Page texts. It had the most old-fashioned explanation of all: Strzok's wife. https://t.co/oMqLxxUs39