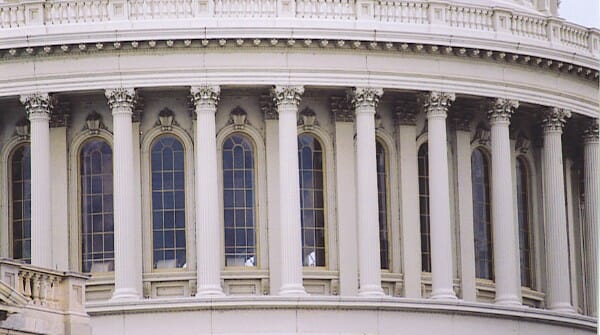 But the Republicans argue four "key pieces of evidence are fatal to the Democrats' allegations," the Daily Caller reported.

"Stripping away the hyperbole and hysteria, these indisputable pieces of evidence show that there was no, 'Treason, Bribery, or other high crimes and Misdemeanors,' as required by the U.S. Constitution," the memo states.

The Republicans argue 1) Zelensky showed no evidence of pressure during the phone call; 2) Zelensky said he did not feel pressured during the call; 3) Ukraine did not know Trump was withholding security assistance at the time of the call; and 4) Trump both met with Zelensky and freed up foreign aid before Ukraine ever investigated Biden as he requested.

A key Democratic Party witness, the chargé d’affaires to Ukraine, Bill Taylor, admitted he did not believe Ukraine knew about Trump's military aid freeze until weeks after the call. And Ambassador Kurt Volker testified he did not find the "hold on security assistance" to be "significant."

The Democrats' first star witness, Lt. Col. Alexander Vindman, testified he did not think it was proper of Trump "to demand that a foreign government investigate a U.S. citizen." But after reading a 340-page transcript his testimony, the Washington Examiner's Byron York said he found four key problems. Beyond opinions, York said, Vindman had few new facts to offer, he withheld important information from investigators, there were notable gaps in his knowledge and he was part of a bureaucracy that has often opposed Trump.

President Trump has insisted that his call with the Ukrainian president was "perfect," insisting there was no quid pro quo. Some Republicans, however, believe the president should acknowledge a quid pro quo — a promise of aid in exchange for a favor — arguing such exchanges are a normal part of diplomacy and that the president had a legitimate concern about possible corruption by American citizens.

Trump's interest in the Bidens is focused on Hunter Biden's receipt of some $80,000 a month as a board member of a Ukrainian gas firm while his father was President Obama's point man for Ukraine policy.

A key Trump defender in the Senate, John Kennedy of Louisiana, said in CBS' "Face the Nation" on Sunday that the issue isn't whether or not there was a quid pro quo.

The Republican senator said assessing Trump's motive will be the decisive factor in any Senate impeachment trial, National Review reported.

Kennedy said "the latter would be in the national interest."

"The former would be in the president’s parochial interests and would be over the line," he said. "I think this case is going to come down to the president’s intent — his motive. Did he have a culpable state of mind? For me ... there are only two relevant questions that need to be answered. Why did the president ask for an investigation? And number two, and this is inextricably linked to the first question, what did Mr. Hunter Biden do for the money?"

"Face the Nation" host Margaret Brennan asked: "So, over the line, does that mean impeachable?"

However, as National Review pointed out, Sen. Lindsey Graham, R-S.C., the chairman of the Senate Judiciary Committee, contends there was
no quid pro quo between Trump and Ukraine.

Former assistant U.S. attorney Andrew C. McCarthy has said he doesn't see any crimes or actions worthy of impeachment, advising the president and his allies to stop insisting the July 25 phone call was "perfect."

"It seems to me like a really botched situation," he said. "And what I'm fearful of, frankly, is we're all going to strain our brains for the next few weeks to get to the bottom of what actually happened here, and what we're going to find is that it's much ado about nothing."

He emphasized that "a lot of people had an idea about doing things that they shouldn't have done, but ultimately nothing ever happened."

"You know, the Ukrainians got their aid — nothing ended up being pulled back from them. They didn't have to make a commitment to investigate the Bidens."

He believes Ukraine should have been asked to investigate the Bidens for violations of Ukrainian law, and the aid should not have been delayed after Congress passed it and the president signed the legislation.

In a tweet last week, McCarthy wrote: "The president's best defense continues to be that any misconduct in his dealings with Ukraine was not impeachable under the circumstances. The sooner he and GOP defenders shift away from 'perfect' and to that, the better off they'll be."