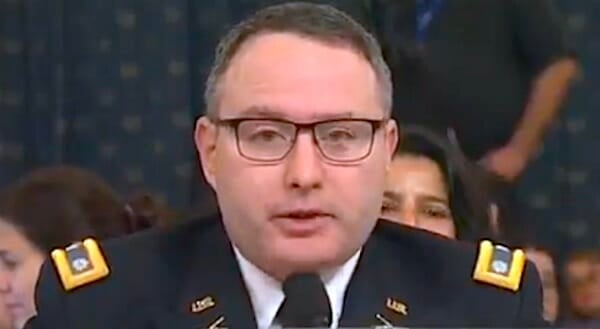 Vindman, who is testifying in a public hearing Tuesday, was the subject of a letter to GOP members of Schiff's committee from Sen. Ron Johnson, R-Wis., the chairman of the Senate Committee on Homeland Security and Government Affairs.

Democrats claim President Trump, using the threat of withholding aid, pressured Ukraine to investigate. In fact, the aid was given to Ukraine and there was no investigation.

The Gateway Pundit noted that unlike the Democrats' witnesses, Johnson traveled to Ukraine with special envoy Kurt Volker, spoke to Ukrainian President Volodymyr Zelensky in person and spoke to President Trump about the hold on military aid.

Johnson stated there was no link between the hold on U.S. military aid to Ukraine and the investigation of the Bidens, but he suggested Vindman was behind the leaks "outside his chain of command."

Vindman has testified to the House that he was concerned that Trump made an improper request that appeared to be related to the 2020 election rather than U.S. policy.

Johnson noted that in his closed-door testimony, Vindman denied he knew the identity of the whistleblower, who has been reported to be NSC official Eric Ciaramella. However, the Gateway Pundit reported suspicions are growing on Capitol Hill that Vindman was also the source of leak of the suspension of U.S. aid story published by Politico in August.

Johnson argued that an official who ultimately is unable to carry out the policy of the president should resign.

"They should not seek to undermine the policy by leaking to people outside their chain of command," he wrote.

The letter called Vindman one of "a significant number of bureaucrats and staff members within the executive branch have never accepted President Trump as legitimate and resent his unorthodox style and his intrusion onto their turf."

"They react by leaking to the press and participating in the ongoing effort to sabotage his policies and, if possible, remove him from office," Johnson said, Fox News reported. "It is entirely possible that Vindman fits this profile."

Johnson was responding to a request from Republican Reps. Jim Jordan and Devin Nunes to hear the Wisconsin senator’s account of the meetings about aid to Ukraine.

Vindman and Jennifer Williams, a special adviser on European and Russian affairs in Vice President Mike Pence's office who also is testifying Tuesday, claimed to have been concerned when Trump spoke with Ukraine's president.

An anonymous whistleblower who heard about the call second-hand filed a complaint, sparking the Democrats' impeachment investigation.

Johnson has said Trump told him the U.S. aid to Ukraine had been delayed to deal with corruption in Ukraine.

Johnson said that the only thing the complaint about the president's telephone call has accomplished is to "fuel the House's impeachment desire (which I believe was the real motivation), and damage our democracy."