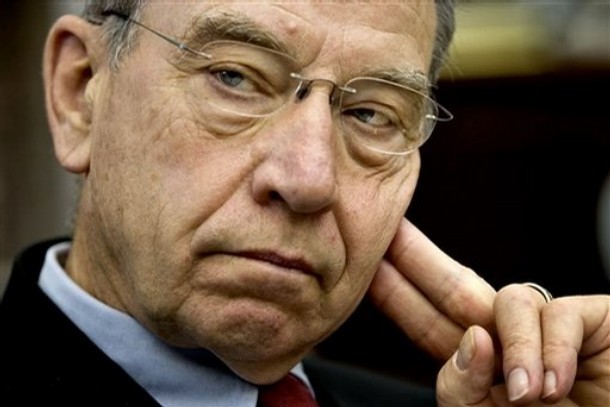 Two Republican senators are asking the national archivist to provide copies of records of meetings in 2016 between the Obama administration, the Ukrainian government and Democratic National Committee officials.

In January 2016, Ukrainian governmental officials and corruption investigators met with members of Obama's National Security Council, the FBI, the DOJ and others, including DNC contractor Alexandra Chalupa, who has been suspected of working with Ukrainian officials to undermine the Trump campaign, the senators say.

"According to Andrii Telizhenko, a political officer in the Ukraine Embassy in Washington, D.C., who participated in a January 2016 meeting, 'U.S. officials volunteered ... that they had an interest in reviving a closed investigation into payments to U.S. figures from Ukraine's Russia-backed Party of Regions,' which refers to the investigation that involved Paul Manafort," the senators write.

Telizhenko "recalled DOJ officials asking investigators from Ukraine's National Anti-Corruption Bureau (NABU) if they could help locate new evidence about the Party of Regions' payments and its dealings with Americans."

The senators say that during the same meeting, U.S. officials "also reportedly brought up investigations relating to Burisma Holdings, the Ukrainian gas company that had hired then-Vice President Joe Biden’s son, Hunter, to serve as a board member."

According to Telizhenko, "U.S. officials told the Ukrainians they would prefer that Kiev drop the Burisma probe and allow the FBI to take it over."

Further, the lawmakers said, White House meeting records "show that Alexandra Chalupa, a Ukrainian-American operative 'who was consulting for the Democratic National Committee' during the 2016 U.S. presidential election, attended numerous meetings at the White House, including one event with President Obama."

The senators say Chalupa "reportedly worked to get dirt on Trump from the Ukrainians."

"For example, in March 2016, Chalupa reportedly met with Valeriy Chaly, Ukraine’s ambassador to the U.S., and Oksana Shulyar, a top aid to the Ukrainian ambassador, to share her alleged concerns about Manafort. Reports state that the purpose of that initial meeting was to 'organize a June reception at the embassy to promote Ukraine.' However, Ukrainian embassy official Andrii Telizhenko told Politico that Shulyar instructed him to assist Chalupa with research to connect Trump, Manafort, and the Russians."