A family counted their trip to the Polar Express in Williams, Arizona, as a loss when their son, who is on the autism spectrum, became overstimulated on the train platform.

Thanks to a thoughtful train conductor, however, the teen was not only given the opportunity to go back and try again, but he also experienced a little Christmas magic in the form of human kindness.

Lloyd and Angie Swartout took their son, Ty, to ride the Polar Express in Williams, Arizona, on Nov. 14, but things did not go according to plan.

The Christmas-themed ride, based on the popular children's book by the same name, is located 30 miles away from the South Rim of the Grand Canyon and is operated by Grand Canyon Railway and Hotel Management. 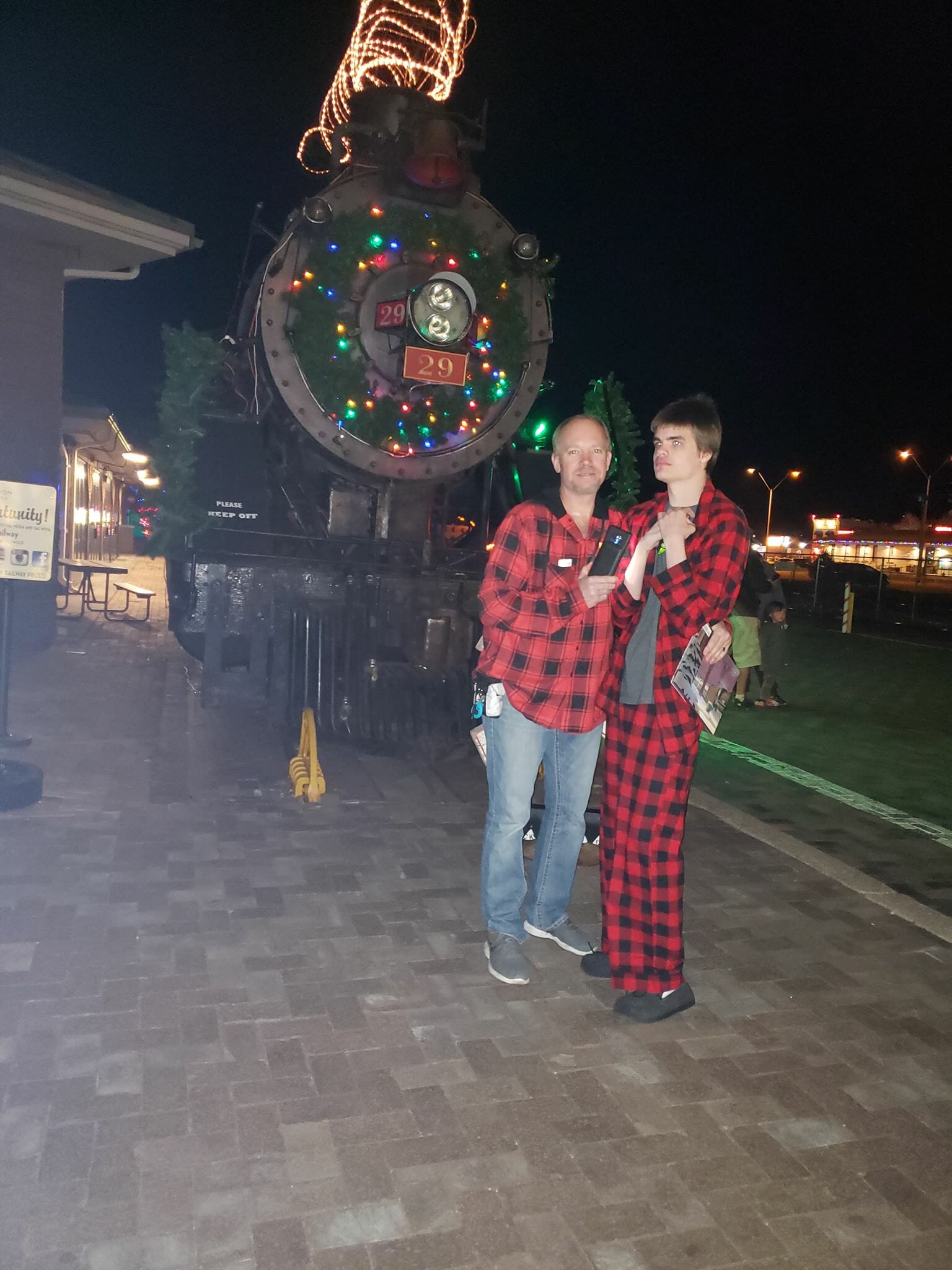 Ty with his father Lloyd Swartout in front of the Polar Express train in Williams, Arizona. (Courtesy of Angie Swartout)

"Tonight we were supposed to have ridden the Polar Express," Angie wrote on Facebook. "Sadly our son had other plans. You see he is autistic. He was so excited that he became overwhelmed and had an atomic size meltdown."

Strangers tried to help and staff members delayed the train to allow Ty to have time to calm down, but Angie soon realized that her son wouldn't be able to board the train that evening.

"Finally, I had to say let's go back to the room. I cried all the way back. My heart was shattered," she wrote. "I wanted this so badly for my son. He loves trains and he loves the Polar Express.

"This was a dream come true. But it didn't happen."

Once back in the hotel room, the family was fighting feelings of defeat when they heard a knock on their hotel room door.

On the other side of the door was a man who had helped earlier and a police officer. They told the family they wanted to do "something special" for them.

Just a few moments later, the train conductor stopped by.

"He sat next to Ty's bed and chatted with him. Ty was star struck. He was so excited and happy. Then the conductor gave Ty his pocket watch!" Angie wrote.

Not only did the conductor go out of his way to make Ty's night, but he also said the concessionaire offered to reschedule their accommodations and train ride.

"They said that they want everyone to experience something special and magical," she continued. "They succeeded. We may not have gotten to ride a train but we got something even more magical ... We got the gift of human kindness!"

The post Angie shared about the kind acts she and her family experienced in Williams quickly went viral. Within a week, it had been shared over 224,000 times.

Angie told The Western Journal she shared the post in hopes of telling her friends and family members how great Grand Canyon Railway and Hotel Management truly was.

"As his mother I was grateful ... no ... I was amazed," she told The Western Journal. "Not very often do you encounter a person that is understanding and accepting, yet here we were surrounded by multiple people wanting to help, caring for my son, and the looks of worry on each persons face brought me to tears.

"I could see that each person that was trying to help truly cared."

On Wednesday, after a light snowfall, Ty and his family returned to the iconic Route 66 town to try again.

Grand Canyon Railway and Hotel Management not only offered them a hotel room and new tickets to ride, but also gave them a special dinner with the train conductor before getting on the train.

This time, Ty was able to get on the train, meet Santa and experience the Polar Express in person.

In a statement sent to The Western Journal, Grand Canyon Railway and Hotel Management said they were "touched by the response to this event" and hoped that Ty and his family were able to "experience the true magic of Christmas."

Agnie also told The Western Journal that she hopes her family's story will encourage others to extend help instead of judgment.

"I am hoping that people will learn to stop for a moment and offer someone help," she said. "When they see a parent struggling with their child to not assume the child is just being bad. Stop and ask that parent if there is anything that you can do to help.

"If we all just slow down and look around ourselves we will see people that could use something as simple as a smile or as big as a grand [gesture] like we got. Kindness goes a long way and can change that person's entire life!"