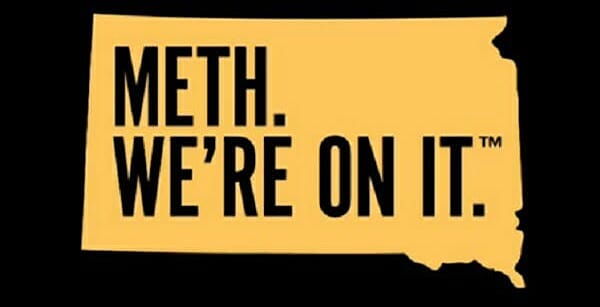 The state of South Dakota has a new anti-drug campaign, but its slogan is raising eyebrows.

Which could be taken the wrong way.

The campaign's website makes it clear: "Meth addiction is everyone's problem. Here's how to fight it. South Dakota has a problem. There isn't a single solution because meth is widespread. But we can approach it from different angles, so it doesn't take over counties, towns, neighborhoods. Let's work together."

South Dakota has launched a campaign to combat meth.

Gov. Kristi Noem said in an announcement the state "is on the case of meth."

"Seriously, we're glad that South Dakota is doing something about methamphetamine abuse. In fact, the state should be so proud of its efforts to fight drug abuse, it should post huge signs with this logo right at the border."

"The tagline is: I'm on meth," says the governor of South Dakota, ON VIDEO.

Well, the campaign is sure to achieve the state's goal of getting people talking about an important issue. pic.twitter.com/eIdYqgLqDn

One Twitter user went for the fun: "South Dakota: If we were any higher, we'd be North Dakota."

Said Twitchy, "There are going to be so many parodies of that logo floating around by the end of the day they won't know which one is real."