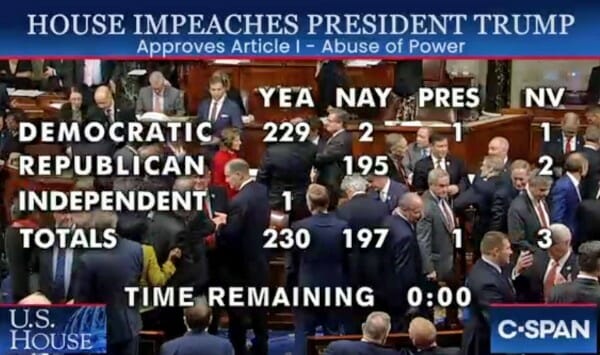 House Democrats may never send the articles of impeachment to the Senate to begin President Trump’s trial, according to a top Democratic congressman.

Rep. Jim Clyburn, D-S.C., the House majority whip, was asked by CNN anchor John Berman on Thursday: "Are you suggesting it's possible you will never transmit the articles of impeachment?"

"If it were me, yes, that's what I'm saying," Clyburn replied. "I have no idea what the speaker will do."

Pelosi said Wednesday after Democrats passed two articles of impeachment in a partisan vote that she wouldn't name impeachment managers or send the articles to the Senate until she was assured that the terms for a trial would be fair to Democrats.

"Why would the speaker of the House step into that without trying to determine exactly what the majority leader plans to do?" Clyburn said.

The Democratic leader said he is willing to wait "as long as it takes" to transmit the articles of impeachment to the Senate.

“Are you suggesting it's possible you will never transmit the articles of impeachment?”

Meanwhile, in a speech on the Senate floor Thursday morning, Senate Majority Leader Mitch McConnell, R-Ky., said it "looks like the prosecutors are getting cold feet."

Chastising Pelosi for "shoddy work," he said Democrats may be "too afraid" to send over the articles passed Wednesday with the vague charges of abuse of power and obstruction of Congress.

"This particular House of Representatives has let its partisan rage at this particular president create a toxic new precedent that will echo well into the future," McConnell said.

Democrats, he said, were unable to "resist the temptation" of going ahead with impeachment without finding any crime.

He accused the Democrats of running "the most rushed, least thorough, and most unfair impeachment inquiry in modern history."

"Forgive me, House Democrats cannot be held responsible for the cravenness of the House Republican Caucus and their blind fealty to the president," he said.

Senate Judiciary Committee Chairman Lindsey Graham, R-S.C., tweeted that if the House Democrats "refuse to send Articles of Impeachment to the Senate for trial it would be a breathtaking violation of the Constitution, an act of political cowardice, and fundamentally unfair to President @realdonaldTrump."

In his Senate floor speech, McConnell said the abuse of power article "does not even purport to allege any actual claim."

Instead, he said, it uses "the vague phrase 'abuse of power' to impugn the president’s action in a general way."

The Founders, he argued, warned against using impeachment in this way, essentially for "maladministration."

The second article, the Republican leader said, centers on Trump using the courts to challenge congressional subpoenas, which is his right.

"It's not a constitutional crisis for a House to want more information than a president wants to give up," McConnell said.

He noted that legal challenges were "a routine occurrence" in the impeachment investigation of Bill Clinton.

"This takes time, it's inconvenient. That's actually the point. Due process is not meant to maximize the convenience of the prosecutor, it’s meant to protect the accused," he said.

McConnell drew a sharp contrast with how previous impeachment investigations were handled.