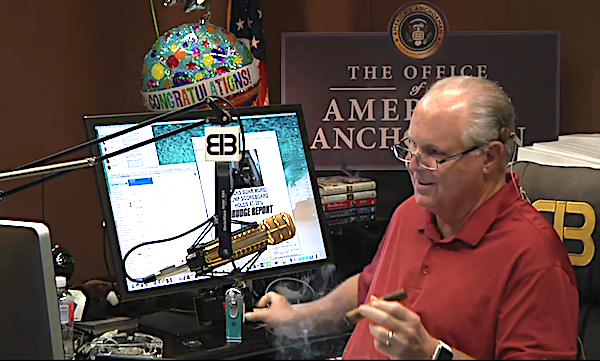 Hours after Democrats adopted their partisan impeachment articles against President Trump, talk-radio host Rush Limbaugh told his listeners that new articles would be coming within days.

Why wait, he reasoned on his nationally syndicated show Thursday.

"Over the Christmas break, I'm gonna be sitting down with Republican leaders and drawing up articles of impeachment for the next Democrat president," he said with tongue in cheek after Democrats voted on party lines.

The articles passed Wednesday night, abuse of power and obstruction of Congress, cite no crimes.

"I don't know who it is, and I don't know when that's gonna be, but we're gonna start working on articles of impeachment for the next Democrat," Limbaugh said.

"I’ll give you a preview of my articles of impeachment, OK? Show you how easy this is to do. The Democrats protested Trump’s victory. The Democrats tried to get the Electoral College to change their votes. Democrats demanded recounts illegally in several states. The Democrats objected to Trump's election being certified. The Democrats spied on his transition," he said.

"They boycotted his inauguration. They started calling for his impeachment before he was even inaugurated. They falsely accused Trump of treason for colluding with the Russians. When they failed, they accused him of treason for colluding with Ukraine. Despite all of this, Trump is still winning. And this just scratches the surface of what the Democrats have been trying to do to Trump since before he was even inaugurated," he said.

"It is not a lie and is not an exaggeration to say that there were many Democrats talking about impeaching Trump before he was even inaugurated, folks. It's in the record. I made a prediction on January 23rd, two days after Trump was inaugurated, I predicted every bit of this that's happening. Not by specific event, but I did say that he would be impeached if and when they found the opportunity to do it. Not the reasons, the opportunity. I predicted why. And that they're never gonna stop," Limbaugh said.

What's the problem for Democrats?

"We have reached the point where they refuse to accept when they lose elections. That is one of the several gentlemanly agreements that the parties have had since the days of the founding. Peaceful transition of power. They have put us on notice that those days are over. Every election they lose they are gonna contest. They are making no bones about that. And in the process, they are hoping to wear down Republicans into not even trying to win elections because it will be easier to lose than to win and put up with this garbage," he said.

He warned that eventually Democrats will want to get rid of elections altogether.

"The day is coming where an AOC type or Rashida Tlaib type or whoever, a new Democrat we don’t even know yet, maybe not even born, is gonna come up with a great idea: 'You know what? The elections are the problem.' They've already set the table. You're stupid, you're deplorable, you're unqualified, you don't have any right electing people, you don't know who you're electing, you're too dumb, you're too stupid, you're too unconnected, disconnected.

"They'll promote it as a way of saving democracy, saving our great Constitution, preventing the people from making uninformed mistakes like Donald Trump. Do not doubt me the day is coming where some Democrat or leftist is going to get serious and put forth the idea that we need to rethink how we choose leaders."