As politics and economy are intertwined in today's economic system, manipulating politics also means manipulating markets. The political green movement illustrates this deception to the max. As the billionaire-funded, Wall Street-supported #GretaThunberg #ClimateChange #Apocalypse #ExtinctionRebellion push demands divestment in oil, who is looking to gain when the shortage sets in?

At the center of attention are MSM-loved Extinction Rebellion and Fossil Free – the group behind the public child abuse of Greta Thunberg. The girl clearly has no idea that she serves Wall Street billionaire interests as a media puppet for a much broader game.

We live in a time of massive manipulations of politics from the financial industry. The media owners now also own the largest corporations in America. The media have become a political tool for the billionaires' next investments. Globalist politics, the socialist press and robbery-capitalism in Wall Street walk hand in hand these days. 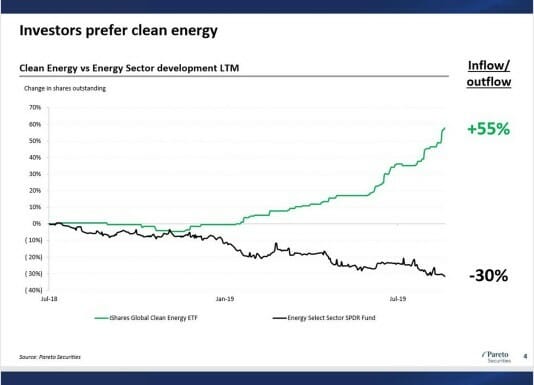 Source: Pareto Securities 2019: Noticeably from January, 2019, the green energy investments took off and increase by 55% so far this year (per September 2019 ) and investments in the oil energy sector fell by 30%. "Strangely" in parallel with the Fossil Free campaign.

The leading Wall Street investors know that the world does not have any comparable source of energy than coal, oil and gas. Water, solar and wind technology is not, at its current stage of development, on any level able to compare in power intensity or solve the world's energy needs. Bill Gates recently also pointed this out.

So, who is manipulating the world energy market through the billion-dollar reallocation of Wall Street funds combined with an apocalyptic end-of-the-world media deception with front-runners such as the child Thunberg? The aim is to end investments in oil and gas worldwide. Who wants to shut down energy to create an upcoming shortage, only to earn billions when the tide turns?

The irony is that the world's leading hedge fund manager, known long term for manipulating markets, George Soros, is one of the main drivers behind the eco-friendly climate change organizations.

The climate change business is a trillion-dollar industry now. The Heritage Foundation states that in 2012 alone, the left-wing Climate Policy Initiative study "Global investment in climate change" found that $359 billion was invested in eco-projects that year alone. 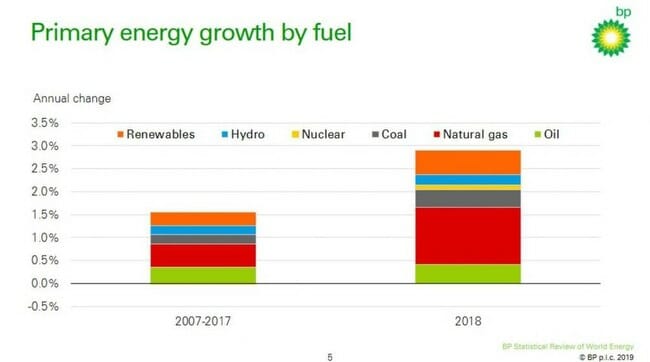 Source; BP Statistical Review of World Energy showing that renewables are 0.5% of the approximately 3% growth in energy by primary fuel type. This is the same growth as coal. Imagine the amount of coal that would be used in the world, if oil and gas did not provide a much cleaner source of energy.

Here is the catch: George Soros' investments in oil, gas and coal far overshadow his investment in eco-groups. He is not the only left-wing billionaire donating to end oil, and at the same time investing heavily in oil and gas.

The point is that the U.S. billionaires profit from all of this:

By controlling the fossil fuel sector through the Wall Street divestment in oil strategy, an energy shortage is created in the world. Once the shortage sets in, the very same investors will profit by the billions.

Their army of green youth, having worked for free or paid very little, will gain nothing, and simply return to school. None of them is likely to complain as most never even found out what happened. They would be happy that the world did not end in the much anticipated apocalypse, created by their sectarian green "religion," after all.

Another benefit few speak about, actually none as far as I have seen: the Wall Street billionaire takeover of local shale oil companies through the prolonged oil crisis, which puts the small shale owners out of business as they are not able to pay back debts. U.S. laws state that whoever finds shale on his property, owns it.

Investors starve local shale drillers for funds, write the Wall Street Journal and Financial Times, underlying the squeeze of funding. As hundreds of local shale oil companies – many with local owners – now are bankrupt, the billionaire-owned, regular oil companies are ready to take over. As FT points out: Consolidation is underway.

The divestment strategy fuels the American economy, which needs low oil prices. The political green movement, the Wall Street-funded community awareness groups and active demonstrators such as Extinction Rebellion and Fossil Free, as well as the U.S. trade war on China all boost low oil prices and thereby, the U.S. economy. The United States' central bank, the Federal Reserve, is a privately owned business at its top levels, as most are aware of.

Hanne Nabintu Herland
Hanne Nabintu Herland is a historian of religions and best-selling author. She is the founder of The Herland Report Scandinavian news site, TV channel on YouTube and Podcasts which have millions of readers/viewers yearly. This is a great place to watch interviews with leading intellectuals from across the political spectrum. Her latest book is "Trump: The Battle for America." Also read "The Culture War: How the West Lost its Greatness." To learn more about her, visit www.theherlandreport.com and follow her on social media: YouTube, Facebook and Twitter.
@HanneNabintuHer
Today's young Marxists: Useful idiots to the global elite
The brutal ruthlessness of the despicable Karl Marx
Still and always the most significant person in world history
The son of Mary: God's radical solution to evil
Kanye West, Hitler and the Nazi ideology
See more...