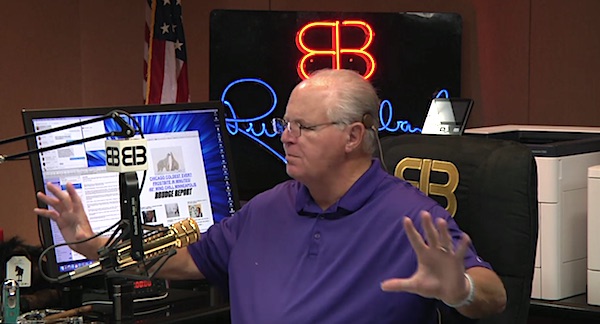 The Democrats claim in their impeachment inquiry that President Trump wanted Ukraine to make a public announcement about an investigation of the Bidens.

While Joe Biden was vice president his son Hunter was paid $83,000 a month to be on the board of the Ukrainian natural gas company Burisma, despite having no experience in the industry. Joe Biden then threatened to withhold U.S. aid unless a prosecutor investigating Burisma for corruption was fired.

But a new report from Time magazine, noted talk-radio host Rush Limbaugh, blows the Democrats' claim out of the water.

Time spoke with Andriy Yermak, an adviser to the Ukrainian president. He's the official that U.S. Ambassador Gordon Sondland claimed to have told, "I think Trump wanted Zelensky to make a public announcement [about an investigation]."

But Yermak told Time that Sondland never told him that.

In fact, Yermak says the two of them never even spoke, except for a few innocuous remarks in passing. The Ukrainian official said they never had any kind of a private conversation.

Yermak recalled bumping into each other in a hallway next to an escalator and discussing only how well the meeting went.

Limbaugh said Time "has to admit these comments cast doubt on an important moment in the impeachment inquiry’s reconstruction of events, specifically, the only known point at which an American official directly tells the Ukrainians about the link between U.S. aid and the announcement of specific investigations."

He said the revelation "totally takes the entire foundation of the Schiff-Nadler impeachment proceedings out from under them."

"It totally destroys the basis on which they did all of this."

The House Intelligence Committee chaired by Rep. Adam Schiff, D-Calif., brought in State Department employees and other bureaucrats Limbaugh described as having their noses "all out of joint that Donald Trump even got elected, that somebody so smelly and somebody so deplorable and somebody so unsophisticated and so uneducated could possibly be thrust into their elite world."

"The only witness with firsthand knowledge of anything close to a quid pro quo was Gordon Sondland," Limbaugh noted. "Gordon Sondland testified that he told President Zelensky's adviser, Andriy Yermak, that he thought — he couldn’t remember for sure — he amended and revised his testimony at this point after hearing from Bill Taylor and Yovanovitch and some of the others.

"He thought, he presumed that Trump wanted Zelensky to make a public announcement about investigating Burisma before he, Trump, would release the aid. Sondland then told Bill Taylor and others that, yes, he had told Yermak that. So then this gets passed around. Sondland therefore become the source for the story that Trump demanded a quid pro quo, and it was aid in exchange for Zelensky announcing the investigation into Burisma. Not starting it. Not doing it. Just announcing it."

Time said the "most crucial point at which Yermak’s recollection contradicts the testimony of the inquiry’s witnesses relates to a meeting in Warsaw on Sept. 1, when Ukrainian President Volodymyr Zelensky met with U.S. Vice President Mike Pence."

"The meeting was part of an ongoing effort by the Zelensky administration to improve ties with the Trump administration," Time said.

"One of the American diplomats who attended that meeting, Gordon Sondland, the U.S. ambassador to the European Union, testified before the inquiry last month that he pulled Yermak aside after the Warsaw meeting and delivered an important message: U.S. aid to Ukraine would probably not resume until Zelensky’s government announced two investigations that could implicate President Trump’s political rivals."

"I told Mr. Yermak that I believed that the presumption of U.S. aid would likely not occur until Ukraine took some kind of action on the public statement that we had been discussing for many weeks," Sondland testified."

Not so, said Yermak.

"Gordon and I were never alone together."