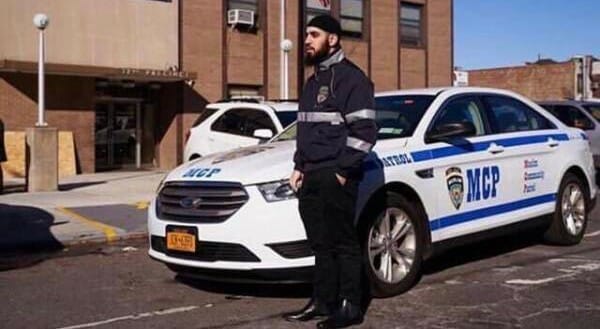 One week ago, however, a patrol was confronted by members of the notorious Bloods gang in front of a Brooklyn mosque, according to a Clarion Project report cited by the Gateway Pundit.

At the Masjid Taqwa mosque on Dec. 10, a member of the Bloods flashed his gun, warning the Muslim Community Patrol: "This is not over. It's just begun."

The Clarion Project said the conflict began Dec. 10 when a teenage boy allegedly "disrespected" a Muslim woman outside the mosque.

The boy did not touch the woman, bystanders say, but did speak to her.

A Muslim Patrol member grabbed the teen by the collar and threw him against the gate of mosque.

While the boy was pressed firmly against the fence, the Muslim Patrol member held him by the neck and lectured him.

After the rebuke, the boy complained to his father, a senior member of the local Bloods gang. The father mobilized six other Blood members to join him and went to Masjid Taqwa.

A witness told the Clarion Project that one blood member was armed.

"He raised his jacket and flashed that gun. Those dudes came out there to shoot up that Masjid. The father, he wanted to mess that MCP officer up."

According to the witness, the father said to the Muslim Patrol officer, "Dude, I’m going to bust in your f—— mouth if you ever put your hands on my child again."

A witness said: "It was going to be something big out there."

The Blood members shouted: "You all are running around here playing like you’re the real police. You all want to put your hands on these little kids. We don’t give a f— about your Masjid. F— your Masjid."

The New York Police Department showed up and ordered the Bloods and Muslim Community Patrol to disperse.

The Gateway Pundit noted the Muslim Community Patrol in Brooklyn is reminiscent of the Sharia police in London that enforce Shariah law in neighborhoods by harassing homosexuals, people who drink alcohol and women in mini skirts.

In 2002, Saudi Arabia's religious police, the "mutaween," stopped schoolgirls from leaving a blazing building because they were not wearing correct Islamic dress, according to Saudi newspapers.

In a rare criticism of the religious police, officially known as the Commission for the Promotion of Virtue and Prevention of Vice, the BBC reported, the Saudi media accused them of hindering attempts to save 15 girls who died in the fire.

One witness said he saw three policemen "beating young girls to prevent them from leaving the school because they were not wearing the abaya," a cloak-like garment that covers the head.