Enjoying and celebrating the Christmas season is a choice. It often boils down to turning away from the negatives of December chaos and then focusing on the Christmas positives of family, friends, freedom and faith. Mainstream media and the far left constantly put us in this yuletide pickle.

For example, they are primed and pumped right now to take down the president through the impeachment proceedings. What's crazy is that congressional Democrats are attempting to derail the president by fast tracking the articles of impeachment in the very heart of the Christmas season.

Is there nothing sacred anymore? Do any of them even think about deferring the congressional circus until after the New Year? Would it really make any difference to take a Christmas pause on the proceeding pandemonium?

Because progressives want only the impeachment hearings to proliferate the airways, they are equally hell bent not to allow a single positive White House moment come across the news during this Christmas season.

Case in point: This past week both president Trump and first lady Melania presided over noteworthy Christmas events and messages, which focused upon patriotism, unity and the real reason for the season. Like administrations before them, they lit up the National Christmas Tree and showed off the decorations inside the White House. Yet, when it came to reporting on the positives the Trumps contributed, televised mainstream media – except for Fox News – were as quiet as church mice about the White House's good tidings.

For those few who reported on it, even online, it was extremely brief, extremely edited or sandwiched in negative narrative. For example, People.com reported, "Trump Lights National Christmas Tree During Another Tumultuous Week for the White House."

Yahoo expanded the gloom-and-doom by saying that the Trumps "put on a happy face Thursday evening to light the National Christmas Tree amid a tense political week that saw both the president and the first lady lashing out at their critics."

What's interesting but not surprising is that when President Obama and first lady Michelle were in office, special attention – including hour-long Christmas specials – were run on in prime-time on multiple networks every year, celebrating and highlighting the White House Christmas decorations, cooking, celebrations and sentiment.

Can you even imagine any network but Fox positively reporting at length about the Trump family's White House Christmas?

In my opinion, the Christmas culture war went to full tilt in Washington, D.C., this past week, with the progressives playing the Scrooge. Instead of even minimally reporting on the Trumps national Christmas presidential traditions and positive messages, they sent a hailstorm of hourly recycled news downpours about how the White House is refusing to participate in the impeachment hearings.

Because I know most of my readers across the country and around the world likely didn't receive news about the Trumps positive and uplifting Christmas events and messages, I want to share them with you to encourage you, and then in turn would ask you to post or share them on your social media to inspire others.

This past week, first lady Melania revealed a beautifully decorated White House in this 56-second YouTube video, which included 58 Christmas trees, more than 15,000 bows and more than 2,500 strands of lights. (You can see many amazing Christmas photos of inside the White House here.)

This year's White House decoration theme is "The Spirit of America," with its tribute to the traditions, customs and history that make our nation great. It is a celebration of the courageous individuals who have shaped our country and kept the American spirit alive.

That is why the Gold Star Family tree in the White House's East Wing is decorated with golden stars, red bows and patriotic ribbons in honor of those who lost family members while serving in the U.S. military.

The first lady said in a White House press release, "This Christmas season I want to honor those who have shaped our country and made it the place we are proud to call home."

She added: "When I travel the country, I am inspired by the hardworking people and families that I meet. No matter which state they call home, many Americans share a strong set of values and deep appreciation for the traditions and history of our great nation. Thank you to all of the staff and volunteers who worked to make sure the People's House was ready for Christmas." 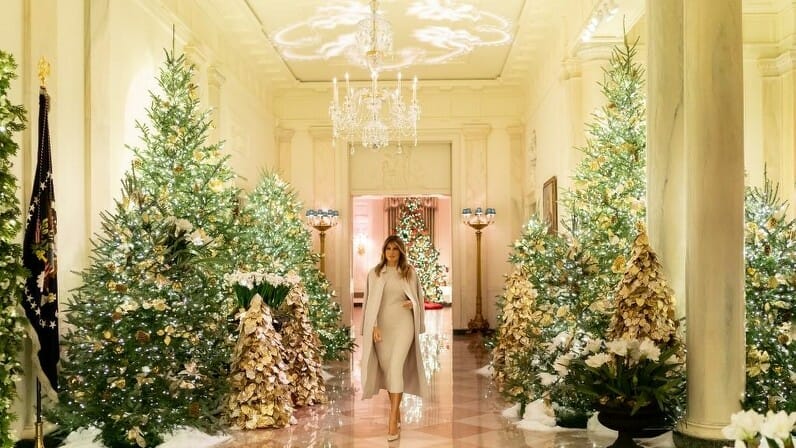 Of course, mainstream media struggled to say anything positive at all about the first lady's Christmas event. Instead, many mocked it and even used it as a platform for political and personal criticism.

Fox News explained, "Many were quick to criticize the holiday decorations, claiming that the first lady's 'Spirit of America' video was reminiscent of a horror film, comparing its contents to the movie 'The Shining.'"

The news agency went on to say that progressive mainstream media's Christmas criticism of the current first lady is not new: "This year's criticism comes after the two previous exhibits were derided. Last year's 'blood red trees' and 2017's hallway of 'sticks' were also compared to horror flicks such as 'The Blair Witch Project.'"

I'm so glad Melania is a fighter and a first-class culture warrior. Despite her critics, she gracefully continued to share her Christmas passion and enthusiasm in this Tweet: "'The Spirit of America' is shining in the @WhiteHouse! I am delighted to share this beautiful exhibit of patriotism for all to see, and excited for everyone to experience the beauty of the #Christmas season!"

I'm also so glad that the first lady doesn't generically use, "the holiday season." Remember, the Trumps not only brought back "Merry Christmas" but "Jesus Christ" into the White House's Christmases, including by erecting a Nativity in 2017.

Strong traditional Christmas sentiment was conveyed again this year by President and Mrs. Trump when they joined a large crowd of roughly 500 people Thursday night at the National Christmas Tree Lighting Ceremony, which is celebrating its 97th anniversary. The American tradition dates back to 1923 when President Calvin Coolidge first lit the tree as a local choir and small U.S. Marine Band performed.

The White House's website posted a transcript of President Trump's speech as he elaborated on the history of the National Christmas Tree Lighting Ceremony and its early pro-Christian culture.

President Trump explained: "In 1923, President Calvin Coolidge lit the first National Christmas Tree. Later that night, African American community centers held an outdoor worship service on these grounds. And during that service, the Washington Monument was illuminated with a beautiful Cross, a powerful reminder of the meaning of Christmas."

Can you imagine what would happen today if anyone tried to start a worship service in the President's Park? Or flash the Christian symbolism of the Cross on the walls of the Washington Monument? Can you imagine how many critics today would cry out "separation of church and state" if such sacred actions were made? Back then, politicians and public alike had no problem with them. We'd be smart to ponder why.

This year's 97th annual National Christmas Tree Lighting Ceremony was hosted by country star Jessie James Decker, who had Max Impact backing him up as well as the rock band of the United States Air Force. The Tucson Arizona Boys Chorus, the United States Marine Band and West Tennessee Youth Chorus also performed. Other performers included the award-winning Christian singers Spensha Baker, Colton Dixon and 17-year-old Chevel Shepherd, winner of Season 15 of "The Voice," who sang a beautiful rendition of "Go Tell it On the Mountain."

And what message was the young and modern Shepherd calling for us to "go tell it on the mountains, over the hills and everywhere"?

President Trump shared that 2,000-year-old Christmas Story with the White House as a backdrop at the National Christmas Tree Lighting Ceremony this way:

"More than 2,000 years ago, a brilliant star shone in the East. Wise Men traveled far, far afield. I mean, they were a long distance away. And they came and they stood with us under the star, where they found the Holy Family in Bethlehem. As the Bible tells us, when the Wise Men had come into the house, they saw the young child with Mary, his mother, and fell down and worshiped him."

The president added, "Christians give thanks that the Son of God came into the world to save humanity. Jesus Christ inspires us to love one another with hearts full of generosity and grace."

Well, now you know why progressive mainstream media steered clear from reporting or showing a complete televised broadcast of the National Christmas Tree Lighting Ceremony. It's not only that they despise the current president, but also for them there's no good reason for reminding Americans of the real reason for the season.

In fact, USA Today covered the entire Christmas speech at the tree lighting with the tart generic report: "President Donald Trump made some remarks and wished everyone a merry Christmas to kick off the holiday season." (Does the Greatest Story Ever Told only deserve "some remarks"?)

No wonder Benjamin Franklin, while believing in a free press, said it can resemble a religious court or tribunal when unleashed against an individual or institution: "The accused is allowed no grand jury to judge of the truth of the accusation before it is publicly made, nor is the name of the accuser made known to him, nor has he an opportunity of confronting the witnesses against him; for they are kept in the dark, as in the Spanish Court of Inquisition."