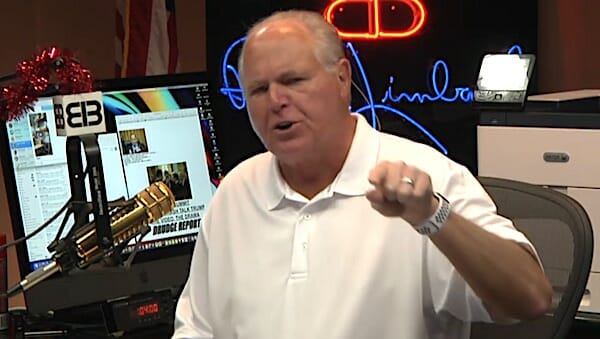 The report from Inspector General Michael Horowitz on FISA abuse by the FBI is much more revealing than many realize, contends talk-radio host Rush Limbaugh, showing House Democrats are "deluded," "deranged" and "sick," and in need of serious mental help.

Horowitz said he found no "bias" behind the 17 "errors or omissions" in the Obama FBI's effort to obtain warrants to spy on the Trump campaign. But Limbaugh pointed out on his show Monday that it meant only that "nobody admitted to any" bias.

"If you read the IG report he concludes there's only two ways to explain what all happened here. It's either incompetence or intentionality. What is intentionality? Bias. He admits it later in the report. It's just this stupid summary that the media was able to first report — we talked about this — that exonerates everybody simply because there wasn't any bias in it? The report doesn't even say that," he said.

Supporters of President Trump contend Democrats launched the Russia probe simply because they could not accept that their candidate, scandal-plagued Hillary Clinton, was lost the 2016 presidential race.

"And the IG concludes that it was either incompetence, which is highly unlikely 'cause it was four years. You don't have a steady stream of this kind of incompetence from the premier law enforcement agency in the world, the FBI. He said it's either incompetence or intentionality. And intentionality, for those of you in Rio Linda, it means they meant to do it, which means bias. The body of the report and the analysis clearly offers bias as one of the only two explanations for how all of this happened," he said.

"The FBI engaged in gross abuse of its power, engaged in deceit after deceit after deceit. The IG report documents countless instances in which the FBI, in order to convince the FISA court to allow it to spy on Carter Page, manipulated documents, concealed exculpatory evidence, meaning denied the court evidence that would show Carter Page wasn’t doing what they alleged, and they knowingly lied to the court. They presented outright lies to the FISA court."

"I think they are deluded, deranged, sick — made so by whatever it is that Donald Trump does to these people just by virtue of his existence," he said. "And I know what it is. It’s just increasingly hard to actually explain it ’cause you need to get into psychological terminology, and that can get kind of boring."

He said it's clear how the Obama administration pushed its agenda.

Limbaugh also pointed out that all 17 of the "incidents" cited in the Horowitz report "went against Trump."

"They knew Carter Page was not a Russian spy. They knew he was not colluding with Russia on behalf of Trump. They knew that he was helping the CIA in operations against Russia — and they named him as a spy for Trump, nevertheless, in the FISA application. In addition to knowing all that, they lied about how long Page had been working with the CIA. Then when they get to the Steele dossier, they said that it had been corroborated."

He explained: "They lied in making the case to spy on an American citizen in the middle of an election. They relied on an embarrassing gossip piece that nobody had any reason to believe, that everybody had every reason not to believe. And they hid all of this from the FISA court. Because they knew the court needed to believe the Steele dossier was reliable. They knew the court needed to think the Steele dossier was the gold standard, that it held the dynamite."

Among the most significant of the remaining 10 is that the "FBI omitted the fact that Christopher Steele’s primary sub-source, who the FBI said was credible, had made statements in January 2017 raising significant questions about the reliability of things in the FISA application and in the dossier."