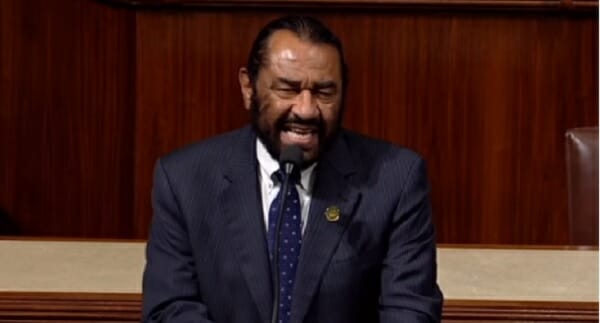 And if the Senate doesn't convict, the expected result in a chamber with a majority of Republicans, Rep. Al Green wants Trump to be impeached again.

And maybe even again.

"The Constitution allows a president to impeach a president more than once. If we impeach now … for one issue that we dearly should, then we find the president has other issues… that merit impeachment, we can impeach again," he said on the floor of the U.S. House.

"There is no limit on the number of times. … We can do it more than once," he said.

House Speaker Nancy Pelosi on Thursday, despite having assured Americans earlier that an impeachment could only move forward if it was bipartisan, announced that her party – alone – would press ahead with the impeachment of President Trump.

The Democrats base their case on an anonymous whistleblower's claim that Trump used the threat of withholding U.S. aid to pressure Ukraine President Volodymyr Zelensky to announce an investigation of Hunter Biden's business dealings in Ukraine while his father spearheaded Ukraine policy. However, Republicans argue, the aid was delivered and no announcement was made.

If the House votes to impeach, the process moves to the Republican-controlled Senate, where there is little support to convict Trump.

Green criticized the Democratic majority in the House Judiciary Committee, which this week held an impeachment hearing, because "the committee only invited white constitutional scholars to testify on the legal merits of Trump’s impeachment."