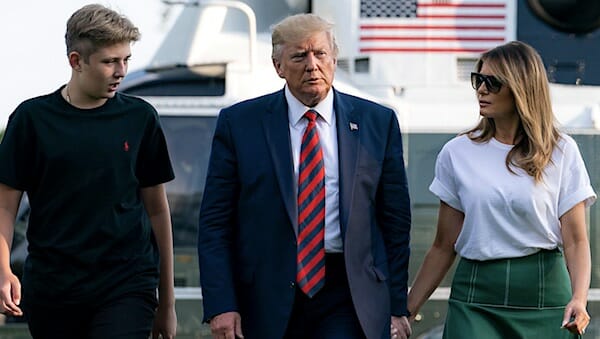 One of the Democratic Party's star witnesses on Wednesday at the House Judiciary Committee hearing on impeachment unleashed what some have described as a "low blow" against President Trump's son 13-year-old son Barron.

Pamela Karlan, a professor at Stanford Law School, apparently was attempting to explain that the U.S. Constitution doesn't allow for "titles of nobility," the Daily Wire reported she

"So while the president can name his son Barron, he can't make him a baron," she said.

"Intense backlash online" was the Wire's description of what followed.

Cliff Sims, a former senior White House aide, said: "These people are sick losers. This is what happens when you think Twitter is real life – you bring up your political opponents' underage children to get lols."

"Karlan's cheap shot invoking Bar[r]on Trump's name just lost them any shred of hope that they're going to win this impeachment battle in the court of public opinion," she wrote.

Team Reich said: "Hunter Biden is off limits at 50 years old but not Barron Trump at 13. Good to know."

Vickie Treece said: "She has to be one of the lowest of the lowest to bring the president's son into this. Her smirk said all there is to say about who she is."

Another Twitter user wrote, "This is what happens when they think their show trial is real life."

"It makes you look mean," he said.