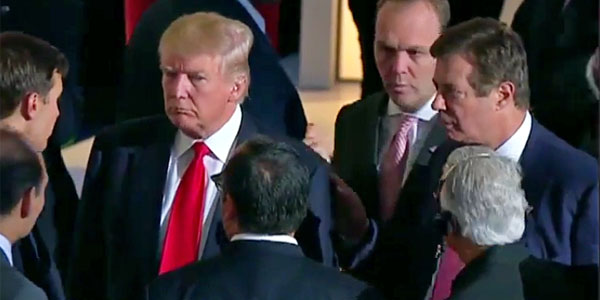 Judge Maxwell Wiley ruled Manafort cannot be prosecuted because the case was similar to the charge brought under Robert Mueller's special counsel investigation, which put him in prison, Fox News reported.

The judge's move is seen as a blow to an attempt by Manhattan District Attorney Cy Vance Jr. to hedge against the possibility that Trump might pardon Manafort for federal crimes.

The DA's office said it would appeal the decision.

The 16-count indictment, as well as the federal charges, had nothing to do with the 2016 election. Manafort allegedly gave false and misleading information in applying for residential mortgage loans.

Turley said that "watering down" of the state protections against double jeopardy in an effort to get Trump threatened constitutional protections.

"The highly dubious effort was led by New York state attorney general Letitia James and, thankfully, it has failed," he wrote.

Turley noted he's been highly critical of Manafort and doesn't view him as worthy of a pardon.

"However, I am relieved that the courts showed more judgment and respect for individual rights than James and others who wanted to lower protections to score political points in prosecuting a Trump associate."

Todd Blanche, Manafort's attorney, said after the decision: "We have said since the day this indictment was made public that it was politically motivated and violated New York’s statutory double jeopardy law."

Blanche said the indictment "should never have been brought, and today's decision is a stark reminder that the law and justice should always prevail over politically motivated actions."

In March, Manafort was sentenced to a total of about seven years in prison in connection with two cases.

He was convicted by a federal jury in Virginia on eight counts of bank and tax fraud. In a Washington court, he pleaded guilty to charges related to foreign lobbying and witness tampering.

Manafort was not in court for the ruling. The Associated Press reported he had been moved from federal prison in Pennsylvania to a hospital due to a heart-related condition.