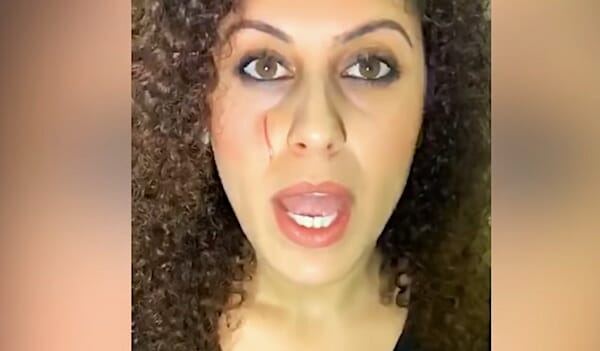 A stunning video of a full-blown anti-Semitic hate rampage in New York City by a woman who apparently is Muslim, as she repeatedly chants "Allahu akbar," has been posted online, and a woman who was one of the targets is warning bluntly: "Do not mess with us!"

"It's in the Quran, where they curse the serpent Jew, you wouldn't believe,” the black Muslim woman says on camera. “You f**king nasty a** Jew. You nasty motherf**ker. You a nasty a** motherf**ker, you stink. You f**king stinkin' a** Jew."

The video was posted by activist Rudy Rochman, who explains that while Lihi Aharon was scratched on her face in the attack, "you've also left a mark on all of us."

He calls her an "Israeli-Jewish hero" who "embodies the spirit which all Jews must learn from."

According to the YouTube posting, Aharon got onto a New York City station at Tribeca after a school induction ceremony. Noticing a woman with multiple possessions on several seats, she asked that they be moved so she could sit down and was refused.

She took another seat and immediately noticed that same woman "insulting a religious Jewish elderly man."

Comments such as "It's good they killed Jews in New Jersey, they should have killed all of you" left her stunned.

The woman also was spouting "Allahu akbar," and things were escalating, the report said.

Aharon started recording, and the woman jumped up and smacked her phone away.

Then the woman grabbed Aharon and started hitting and scratching.

She fought back, and they both ended up on the train platform.

"She kept yelling and saying that everybody should die and she said stupid comments about gays and white people and Jews and hateful, awful things," Aharon says on the video.

"Gay a** mother****er," the Muslim women is shown saying, as she points to another subway rider.

Aharon is urging others: "Do not be afraid to step up and shut people up because there is no place -- not in New York and not in any other place on Earth -- for hatred. All the haters out there, beware. Do not mess with us!"

"Apart from this being yet another anti-Semitic attack, something different happened this time. Lihi fought back. Lihi refused to just sit back and put her head down and succumbing to her attacker. She reached out to my Facebook page and asked me to help her share this incident with the world on my platforms. At first I thought I was just going to report on the attack she mentioned, but when I got on the phone with her I quickly realized that this was about much more," Rochman reported.

"Lihi is an Israeli/Jewish hero and embodies the spirit which all Jews must learn from. Never be afraid and always stand up for yourself."

The video shows that after the attack, the attacker was sitting on nearby steps with what appears to be an officer close by. She continued to spout verbal attacks.