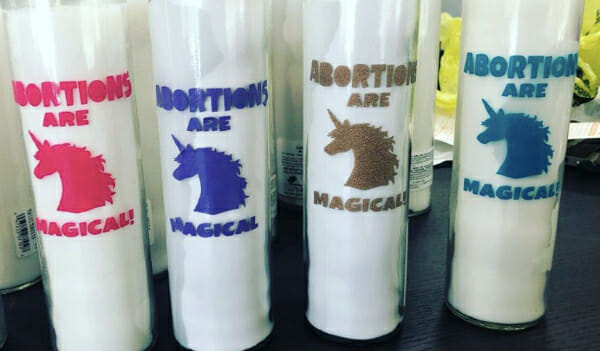 An abortion rights group is doling out a special holiday gift to its supporters, a series of "Abortions are Magical!" candles to celebrate the deadly procedure.

"Getting our holiday party favors ready! Every year we honor our volunteers and make sure they get a token of appreciation at our annual holiday party," TEA said in a post on its Facebook page.

The Daily Wire said it's not clear whether TEA will also offer the candles for sale. But the Facebook comments suggest interest in purchasing them.

TEA responded to criticism of its claim that abortions are "magical."

"Abortions are magical for most people who have them," TEA said. "[R]efuting that just increases stigma around abortion. They are health care, self care, and community care."

Ignoring the anecdotal and scientific evidence of the negative physical, mental, emotional and spiritual consequences of abortion, TEA said abortions "provide new beginnings for people trying to create a future for themselves that may have been unimaginable without their abortion" and "help people prioritize their own physical and mental health."

In 2008, Planned Parenthood began running a Christmas campaign called "Choice on Earth." It featured a card with the words against a blue backdrop with white snowflakes.

Inside, the card read, "Warmest wishes for a peaceful holiday season."

The Marxists' plan to take over the Federal Reserve

FDA delays Moderna vaccine for youth due to heart risk