Last month, I embarked on a cross-country trip to bring our 23-year-old daughter and her car back from her job in New Jersey to our home in rural Idaho. (She'll stay with us over the holidays before taking up a new job on the West Coast.) Starting from tidy Amish farms in Pennsylvania, running through cattle and grain country in western Kansas and eastern Colorado, and ending with the vast wheat fields of the Palouse in northern Idaho, I was in a position to sample the breadbasket in the heartland of America.

Along the way, we passed many people quietly going about the business of feeding our country: farms sporting enormous barns and silos, combines bringing in a late corn crop, small prairie towns with outsized grain elevators and thousands of big-rig truckers transporting goods to urban centers. It made my heart swell with pride and gratitude for all these hard-working unsung men and women in Flyover Country going about their thankless but critical tasks.

It wasn't until I returned home that I heard about the amazing tweet (which has since been removed) put out by a snot named Jackson Kernion, a graduate student and philosophy instructor at the University of California at Berkeley. This intellectual soul took it upon himself to enlighten the rest of the world on his views of rural America.

According to Campus Reform, Kernion began the Twitter thread "by advocating against affordable healthcare solutions in rural America, saying that 'Rural Healthcare Should be expensive! And that expense should be borne by those who choose rural America!' He argued that promoting a need for 'affordable rural healthcare' is equivalent to arguing for rural Americans ‘to be subsidized by those who choose a more efficient way of life. ... Same goes for rural broadband. And gas taxes. ... It should be uncomfortable to live in rural America. It should be uncomfortable to not move.'"

Campus Reform continued: "Kernion tried to justify his statements with economic arguments about not making rural life '*artificially* cheaper,' but quickly devolved into personal attacks against rural and not 'pro-city' Americans."

Then came my favorite part of the tweet rampage: "I unironically embrace the bashing of rural Americans. They, as a group, are bad people who have made bad life decisions. Some, I assume are good people. But this nostalgia for some imagined pastoral way of life is stupid and we should shame people who aren't pro-city."

This tweet, let it be known, actually got some re-tweets and "likes" from similarly enlightened souls.

Speaking as a "bad" person who has made a "bad" life decision by living rural, I'd like to point out (as the Organic Prepper succinctly put it) where Mr. Kernion's avocado toast comes from. No wonder he deleted his own tweet.

You see, this is one of the problems with an increasingly urbanized society: People forget things don't magically appear in their local grocery store. They are so pathetically ignorant of the chain of events behind the scenes, ignorant of every thankless middleman (diesel producers, tractor manufacturers, farmers, harvesters, truckers and packagers, etc.) who seamlessly work to get their avocados, bread and eggs to market. And this twit has the audacity to call these people "bad" and accuse them of making "bad life decisions”"? Arrggghhh. It defies description.

Sadly, Mr. Kernion is not alone in his utter ignorance of where food comes from. Consider this tweet by someone named Kyle Kulinski, a "social Democrat" with a channel called Secular Talk, an affiliate of the Young Turks network (which tells you about all you need to know about him). Mr. Kulinski tweeted the following during a plane flight: "This is land by the Colorado, Kansas border from a plane. Pretty cool. I have no idea how/why it looks like this." 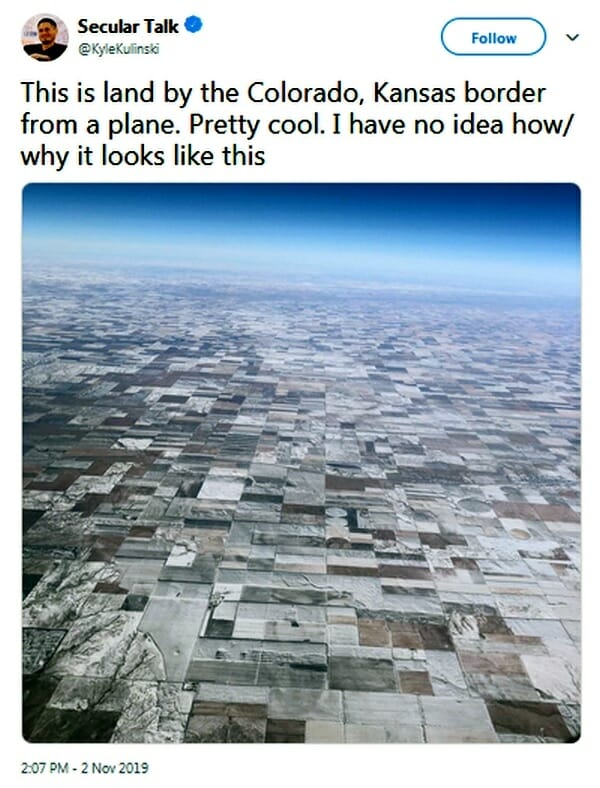 Apparently Mr. Kulinski has never heard of farms. As someone once said, "No matter how times change, socialists will never figure out how food is produced."

These examples epitomize the attitude and cluelessness of coastal elites on so many levels. They fly over America’s breadbasket and wonder what it's for. It's why the Democratic presidential contenders can pitch crazy socialist platforms and think no one in Flyover Country will notice or care. It's why everyone from AOC to Pocahontas Warren can propose legislation that will literally crash the American economy and honestly believe farmers will still grow food and truckers will still transport it to market so they can have their avocado toast.

The blame for this appalling level of ignorance can be pinned on a number of sources – everything from public schools to the mainstream media – but the real culprit (if it can be called that) is urbanization. (Recent headline: "One in three UK children believes cows lay eggs.") I have no problem with cities – except a desperate desire to never again live in one – but they do have the inescapable side effect of divorcing people from what keeps them alive, i.e.,food. If the above anecdotes are any example, this creates people who "unironically embrace the bashing of rural Americans."

As the name of this column – Real America – implies, I proudly stand with every single "bad" rural person who forms the backbone of our nation through their "bad life decisions" so the Mr. Kernions of the world can look down their supercilious philosophical noses at us and the Mr. Kulinskis of the world have something pretty to look at as they fly over us.

Last week, I wrote about how ungrateful we are becoming as a nation. This is an example. Only a fool hates the very people who feed him.