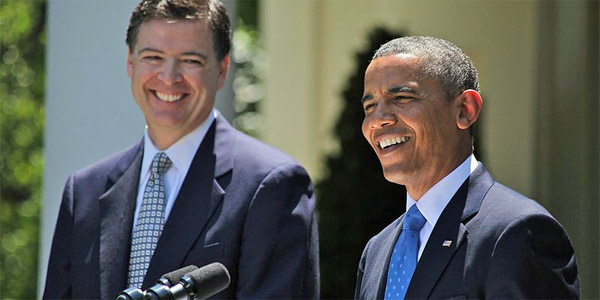 "What did the president know, and when did he know it?" was the key question in the impeachment investigation of President Richard Nixon.

But buried in the 446-page report released Monday is the revelation that FBI Director James Comey briefed Obama and other senior officials at a White House Situation Room, points out former counterintelligence agent and now lead Judicial Watch investigator Chris Farrell in a Daily Caller column.

Horowitz reported the meeting took place at around the same time that "the FBI was trying to determine whether any U.S. person had worked with the Russians" and that they were looking into four individuals with "some association or connection to the Trump campaign."

Farrell argues this information should be seen in the context of the Sept. 2, 2016, text message from FBI lawyer Lisa Page to her paramour Peter Strzok -- the lead Crossfire Hurricane investigator -- saying, "POTUS wants to know everything we are doing."

The text was part of a discussion between Page and Strzok about preparing talking points for a Comey meeting, presumably at the White House.

Farrell points out that the text message "was critically important because it elevated the scandal to the White House level and dragged it into the Obama Oval Office."

But Horowitz's June 2018 IG report "basically ignored the importance of this message, and the new report takes pains to explain it away."

Farrell points out that none of them were interviewed for the Horowitz report.

Remarkably, according to the report, Comey claimed that no one at the meeting "responded or followed up with any questions."

"This revelation should have been a major headline from the IG report was buried in the media narrative that there was 'no political bias' in this obviously grossly biased and ill-predicated domestic spying operation," writes Farrell.

Farrell notes that former Whitewater Independent Counsel Robert Ray was "aghast to learn how little involved the attorney general and the deputy attorney general of the United States" were in Crossfire Hurricane.

Ray said he could not believe "that there is an investigation that would take you inside a presidential campaign and four people who were targeted within that campaign and that doesn't require some kind of supervisory review and initiation beyond simply the inner-reaches of the FBI."

Farrell concludes that people "can rationalize it or explain it away, but any plain reading of the record tells us what we need to know."

"Obama wanted to know everything they were doing, and it looks like he did."