Alvin Toffler, who was an American writer, futurist and businessman known for his works discussing modern technologies, the digital revolution and the communication revolution, said: "The secret message communicated to most young people today by the society around them is that they are not needed, that the society will run itself quite nicely until they – at some distant point in the future – will take over the reigns. Yet the fact is that the society is not running itself nicely … because the rest of us need all the energy, brains, imagination and talent that young people can bring to bear down on our difficulties. For society to attempt to solve its desperate problems without the full participation of even very young people is imbecile."

What's true in technology and business is also true in politics. We conservatives need the younger generations, maybe more today than we ever have.

But who are the younger generations? And what do they want and believe? Understanding the answers to those questions will help us better reach them and call them to help us fix the real problems in America, not just what mainstream media are selling them.

Kasasa, a wholesale financial services company headquartered in Austin, Texas, has done a great job summarizing the four younger generations in America, that is, younger than us Builders or Silent Generation (or Maturists).

Kasasa.com explained: "As of 2019, the breakdown by age looks like this:

Here's how their generations' photo breaks it down:

Here is another helpful chart from fourhooks.com to understand the differences between the generations: 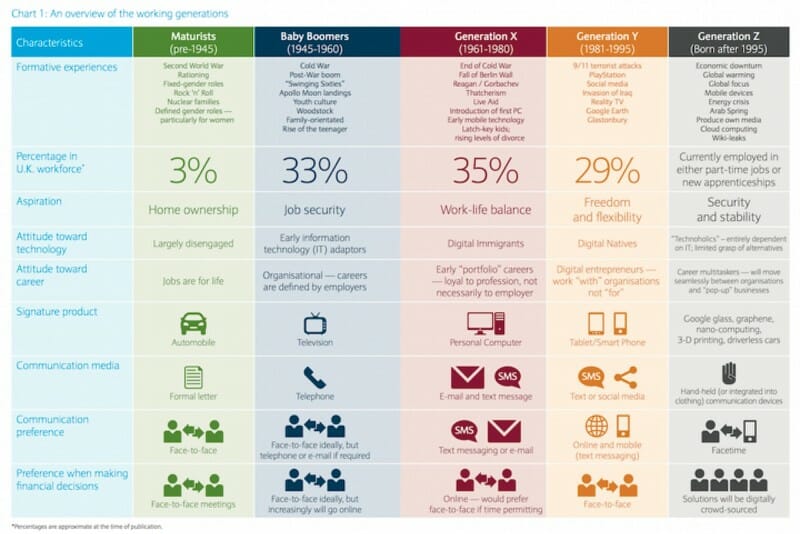 I encourage you read the specific differences and similarities between these generations by visiting kasasa.com and fourhooks.com.

In 2018, a Business Insider survey "found that Gen Zers tend to be more social justice-minded than their millennial counter parts. One 19-year-old from Virginia told Business Insider's Rachel Premack that 'the biggest hurdle for my generation will be the environment and the polarization of political parties' while another Gen Zer from Illinois told Premack that 'teens haven't been this politically active since the Vietnam War.'"

With both Millennials and Gen Zers, I fear that conservatives have just "given them over" to the liberal left without a fight for their American minds. We assume they are going to vote for candidates like Bernie Sanders, but just hope that their army won't be as big as ours.

I understand that a majority of Millennials and Gen Zers are generally independent but vote Democratic, are less conservative and more liberal, believe in same-sex marriage and climate change, are more anti-death penalty and guns, more pro-marijuana legalization and big-government solutions, and are neither particularly patriotic nor religious.

But the fact still is, according to Power of Voice: A New Era of Cause Activation & Social Issue Adoption, the Millennial Impact Report," "at least a third of [Millennials still back President Trump], and they are among the most actively involved of their generation." That might come as a surprise to many of my readers.

Former President Obama won his two presidential elections because of his campaign's slick strategies in targeting the Millennial generation. Even in 2012, Obama carried two-thirds of the youth vote. In fact, so powerful was their vote that a Tufts University study revealed that, if candidate Mitt Romney had merely split that youth vote with Obama, he would be president today.

Of course, disillusionment and dissatisfaction with presidential predecessors is key to winning any election. It is virtually equivalent to the value of having the right candidate. That means a winning campaign must have a candidate with a super strong appeal to younger generations, not one who can merely address their needs.

I agree with Vincent Harris, former digital director for Sen. Rand Paul's political operation, who said several years ago, "It's got to be the right candidate with the right message to excite and motivate that age demographic, with so many distractions in their life, to register, and then turn out."

I know Millennials and Gen Zers love their country, believe in governmental activism, know the power of local community involvement, are open to truth and willing to be challenged, and have never been more disillusioned with politicians on both sides of the aisle as they are today.

What appears to resonate most of all with Millennials and Gen Zers is authenticity. If we can combine genuineness with inspiration and education, I believe we can even turn them from being swayed so easily by the liberal left's agenda. As a matter of fact, that might even be the reason an old tough guy like me is popular with the youthful generations.

I believe that in the next 10 months, leading up to November's presidential election, we conservative patriots are in a unique position to help change our country by reaching out to young people in our own lives and circles of influence. We shouldn't wait for our political party or a presidential candidate to lead the way in reaching them before we try, especially those among our own families. At very least, as parents and grandparents, we need to be the primary models, mentors and motivators in the lives of youth and not leave those roles to other educators or influencers.

We must remind them of the importance of our republic's history and legacy, and all of our duty to set aside self and uphold the founding tenets of our country; to fight to preserve what has been handed to us. We have to reintroduce them to the U.S. Constitution and the Bill of Rights, and then help them to see which candidate best aligns with those founding documents.

If we lay the groundwork in young people's lives, they will be more apt to support and vote for a candidate who stands for truth, justice and conservative values, even if he or she runs on a platform a bit contrary to their generational preferences or agenda.

As I wrote in my New York Times best-seller, "Black Belt Patriotism," in the chapter "Calling all Millennials!":

Millennials [and I would add now, Gen Zers] are the future of America, but are not connected to its past. Due to our distortions and revisions of history, and oversights in education, the Founders are simply folklore but not a legacy to follow. Young Americans are willing to move America forward, but don't see any other way ahead beyond the creation of a more socially-conscious, domestically-strong, globally-peaceful nation. But we must help them to hear the voices of the distant past, and that they share commonalities with early Americans.

But herein lies their potential soft spot: Millennials [and Gen Zers] can too easily be swayed by slick-sellers of tolerance and compassion, because jumping off the bandwagon of bigotry is their allegiance and generational calling card. From popsicles to politics, truth can be too easily obscured, obliterated, and even abandoned, in their pursuit of domestic welfare, unity, and acceptance.

That is why I don't (and we must not) shy away from encouraging and challenging Millennials' [and Gen Zers'] quest to broaden their thinking even to consider the potential benefits of and truths in those things their peers might generally refuse or oppose (like conservative beliefs, dogmatism, national security, government, etc.). It's good to have a healthy skepticism before you are sold on a decision, but we also want to caution throwing the baby out with the bathwater. As it says in Proverbs, "The wise in heart will be called discerning."

If we're going to win the culture war, we need the Millennials [and Gen Zers] to do it. There is no way around it. We need to reengage with our young people and plug them into America's glorious past so they can build a brighter future.

Of course, calling up the reserves of younger generations to save America is about far more than winning a presidential election. It's about truly valuing the work of our Founding Fathers, saving the memory and fabrics of our republic, and leaving a legacy to perpetuate the very heart and soul of the country we love.

I'm back to that profound truth articulated by President Ronald Reagan, "Freedom is never more than one generation away from extinction. We didn't pass it to our children in the bloodstream. It must be fought for, protected, and handed on for them to do the same, or one day we will spend our sunset years telling our children and our children's children what it was once like in the United States when men were free."